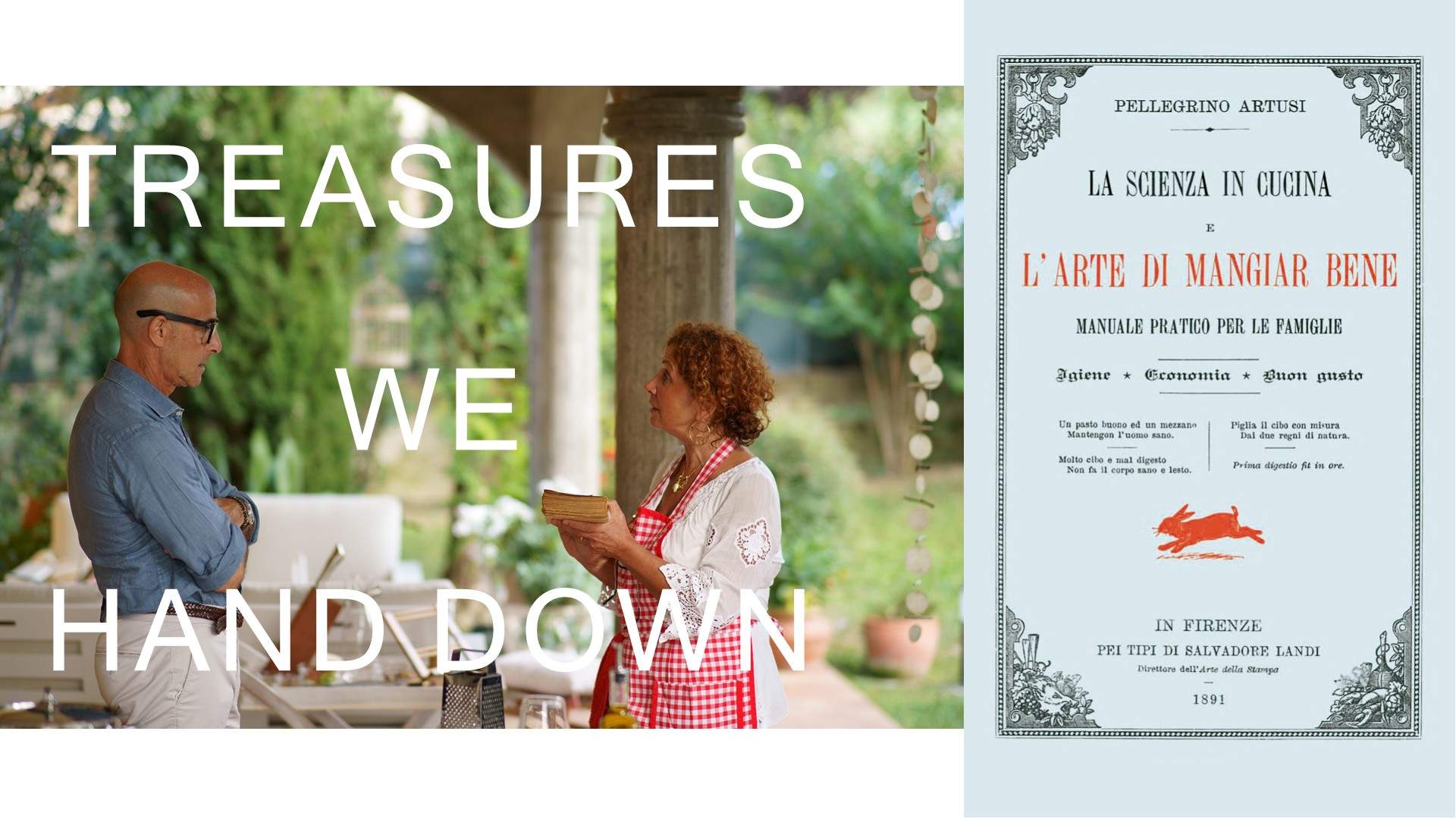 I doubt I was alone in choking up a bit in Searching for Italy episode #3 when Stanley Tucci’s host Barbara Asioli pulled out her worn and treasured copy of La Scienza in cucina e l’Arte di mangiar bene, or Science in the Kitchen and the Art of Eating Well. As described on the show, this cookbook, originally published in 1891 by Pellegrino Artusi – a man from the town of Forlimpopoli in Emilia-Romagna – is considered the first cookbook of then recently united country of Italy.

Since 1891, La Scienza in cucina has been handed down year after year, from generation to generation, as it was for Barbara Asioli. If you’re Italian-American, it’s quite possible your grandmother, or great-grandmother or even great-great-grandmother at this point, received a copy as a wedding gift.

The emotion of seeing that well-used family heirloom was soon replaced by astonishment that the recipe for meat sauce in Artusi’s collection has no tomatoes. None. Zero. It is a ragù bianco as it’s known in Bologna, or white meat sauce. The ingredients are simple – meat, onion, carrot, celery, seasonings – all simmered together as shown by Barbara Asioli.

I’m not sure, but did anyone else notice that Stanley Tucci was just a little less than enthusiastic when he sampled this version of ragù? My guess is that the Tucci family recipe was built on tomato sauce, and at least in Stanley’s eyes and mouth – although he was too polite to say it – tasted better.

My curiosity aroused, I did some digging on the history of ragù to find the “authentic recipe.”

Guess what? You could write a dissertation on the origins of ragù, which has undoubtedly been done many times.

Suffice it to say there are many historical accounts of a ragù-like sauce predating Artusi’s recipe, with sightings across Europe.

Ragù appeared in kitchen of Louis XIV, or Luigi XIV as he’s known by Italians, thanks to a chef with Italian origins. At the same time it was also being served in a cardinal’s court in Imola, while a different version was being developed in Naples.

But at the end of the day, and perhaps to put an end to this debate, ragù alla bolognese classico has been granted special status as a Prodotto Agroalimentare Tradizionale, or traditional dish to say it more simply. And the recipe recognized by the officials at the Accademia Italiana della Cucina is  – I am pleased to say – the very same recipe for ragù given to me years ago by my friend Bianca who lives in Bologna.

Who knew that for all this time

The surprise ingredients in this version (missed by Signor Artusi along with the tomatoes) are milk and white wine, preferably from Emilia-Romagna.

Let’s return to Artusi’s cookbook. In addition to the recipes, Signor Artusi gives a lot of advice on healthy eating, and often surrounds that advice with amusing anecdotes. His aim was greater than just providing a collection of recipes. He wanted to support healthier eating habits and to entertain along the way. In that way, this cookbook from 1891 is actually quite modern.

For example, we all know about the absolute need to cook pasta al dente, meaning that pasta should always be pulled from the water while it is still firm, never overcooked until it is soft.

And to be honest, you need to order pasta in Rome

Reading Artusi’s recipe for Maccheroni alla Bolognese told me why al dente is so important. Artusi points out that if the pasta is firmer, it requires more chewing, which activates more saliva, which aids the digestive process.

One final note about Artusi’s meat sauce – He recommends cooking it for five or six hours to extract all the flavor of the meat into the sauce. And as I read over and over in my search for the true ragù recipe, there are no shortcuts in making ragù. As one writer put it, “Do not believe in the fable of the rapid ragù!”

That admonition to cook for hours, and take no shortcuts, may well explain the antipathy to cooking of my lovely and loving mother-in-law.  Fulvia was not interested in spending five or six hours in the kitchen, not even ten minutes to be honest. 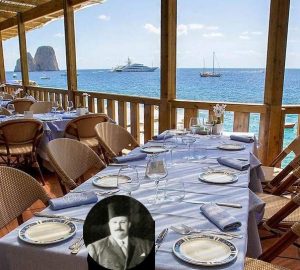 Apart from exposing the lie to the image of the stereotypical Italian mother, her aversion was surprising for another reason.

Fulvia’s father had been a pastry chef at one of the leading restaurants on the island of Capri, La Canzone del Mare.

According to family legend, during their honeymoon on Capri, Fulvia and her husband Luciano had dined at La Canzone del Mare next to King Farouk of Egypt, who was also at the restaurant that night.

But I’ve digressed from the topic of antipathy to cooking.

Even non-cooks like Fulvia are forced to have at least one specialty they can make when special circumstances arise, and my mother-in-law had cotoletta alla Milanese, or veal cutlets Milan-style. It was her go-to dish for special occasions, like the time my parents first visited Milan after my marriage to Lorenzo, and were served cotoletta by Fulvia (with an assist from my sister-in-law Francesca).

Like mother, like son. My husband does not cook either. But luckily, his mother passed on her recipe for cotoletta alla milanese, which has also become Lorenzo’s go-to dish when constrained to be in the kitchen, say for my birthday or Valentine’s Day. By the way, there’s nothing wrong with cotoletta alla milanese – In fact, it’s one of my favorite dishes and has its own storied history. But one deep dive into food history is enough for one day.

Fulvia used to joke that her family crest was made up of cotoletta and bottone mancante, for all the missing buttons she had confronted over the years and for all those cotoletta she cooked. With that joke, I understood she handed down to her children much more than the recipe for cotoletta – She gave us her wry and balanced view of life.

Looking forward to the next time, alla prossima volta, A. S. Furbetta

Oh, just one last thing – Grazie to all of you who read STARVING FOR ITALY during the launch week, and to those who reached out either through comments or by sending email. It means the world to me. My friend Bianca emailed – yes, the same Bianca who gave me her ragù recipe – and said she is Starving for Italy too. Since the pandemic has prevented travel within Italy, it turns out even Italians in Italy are affected by the same longing for Italy as I feel.

La Scienza in cucina e l’Arte di mangiar bene, by Pellegrino Artusi, and the English version, Science in the Kitchen and the Art of Eating Well have been published in many editions since 1891. The original Italian version, out of copyright, can be found on the Internet for download.  The most recent English version is available from its publisher, University of Toronto Press. Or your favorite bookseller.

The recipe for ragù alla bolognese classico is deposited with the Accademia Italiana della Cucina (Italian Academy of Cooking). An English translation can be found here.

The restaurant La Canzone del Mare (Song of the Sea) is still going strong on the island of Capri. It is located seaside at Via Marina Piccola 93, Capri.

The Postcard of I Colli Bolognesi shows the rolling hills of Emilia Romagna outside Bologna. Much is written about the culinary prowess of Emilia Romagna, with its fine agricultural production of parmagiano, prosciutto, balsamic vinegar, wine and more. This picture is from Valsamoggia, where you’ll find a wonderful restaurant…

Amerigo 1934, Via Guglielmo Marconi, 14/16, Savigno (Valsamoggia, BO). Our friend Patrizio (wonderful cook, food savant, also husband of Bianca) first took Lorenzo and me to Amerigo for dinner years ago. I remember vividly the dessert of exquisite balsamic vinegar over ice cream. (Do not try this at home, your balsamic vinegar will not match theirs!) Amerigo now has a Michelin star, and is worth every minute of the trip through these hills. Others agree.

Update:  We learned the facts about the Tucci family recipe for ragù in the fifth episode of Searching for Italy, and I was right. It’s made with lots of tomatoes. You can find the recipe in The Tucci Cookbook, by Stanley Tucci (obviously), available from its publisher Simon & Schuster. 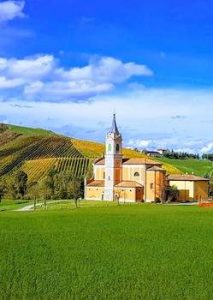