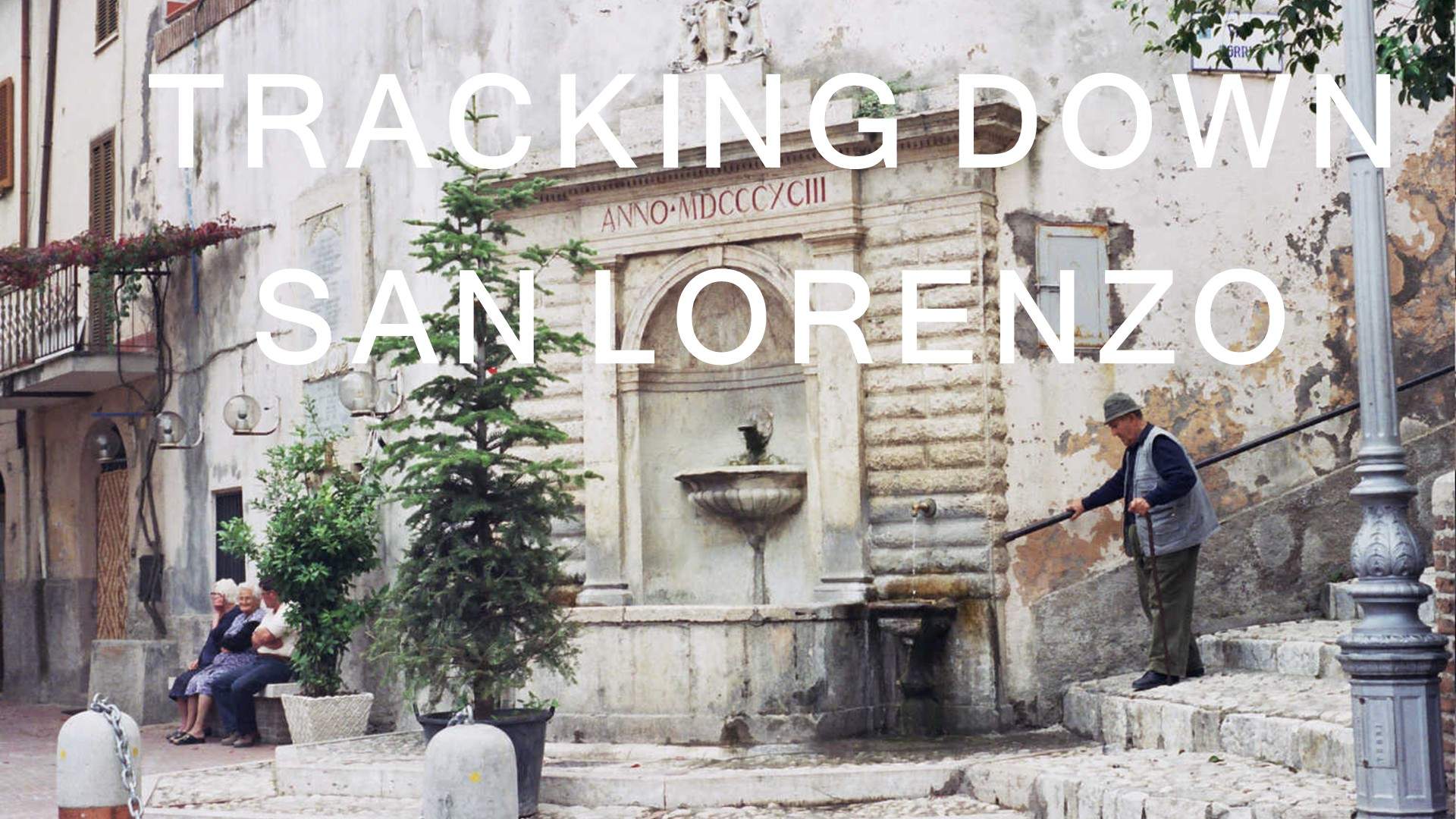 As noted last week, remembering birthdays and other important days is an element of la bella figura. Earlier this year, my husband Lorenzo and I each qualified for brutta figura when we forgot his brother Livio’s onomastico, or his saint day. No WhatsApp call, no Facebook message, no email, nothing. We felt badly.

Celebrated in Italy (and many other predominantly Catholic and Eastern Orthodox countries), the onomastico is like a second mini-birthday on the saint day of the saint whose name you were given. For example, Livio’s birthday is in July, but his onomastico is celebrated on the saint day of San Livio, February 23.  Calls, messages, and other forms of small remembrance (presents!) are given – and expected – from friends, and certainly from your family.

To be honest, having been raised a Midwestern Lutheran, where saint days are unknown, I’ve always been a little skeptical of this tradition. It seemed like a ploy to get a second showering of gifts and attention.

But then Lorenzo told me the story behind his saint, San Lorenzo, and I became more interested. He said that San Lorenzo had been roasted on the grill.

“Really?” I said. “Who gets roasted on the grill?”

Many of the first saints were martyrs during the early days of Christianity, tortured for their beliefs. Tradition has it that when San Lorenzo was tortured in Rome in 258 by being put on a rack over a hot fire, after suffering for some time, he said to his torturers,

“Feel free to turn me over, I’m done on this side”

When I still expressed some degree of skepticism, Lorenzo said that in any town with a church dedicated to San Lorenzo, we would find a painting of him on the grill – Proof of the event, or at least the traditional telling of the event. I filed the information away.

Many years later, in 2003, we were driving in the countryside of Lazio, about 50 kilometers outside Rome, on our way to visit friends in Salci Sabino. I was studying a map spread across my lap, and saw a town called Poggio San Lorenzo. Surely there would be a church dedicated to San Lorenzo in a town named after him. It wasn’t hard to convince Lorenzo to take the detour. 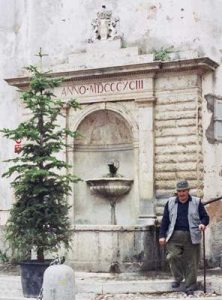 We arrived in the central square of Poggia San Lorenzo during the midday pause.

On one side of the small piazza was a stone fountain around which were gathered the anziani, the seniors of the town.

We had achieved our goal. 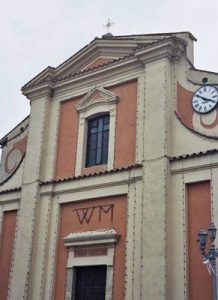 Well, not quite, because the church was locked tight.

We approached one of the elderly gentlemen in the square, and asked when the church would open after the midday break. He explained that the church no longer had a priest or staff. It would be a couple of weeks before a traveling priest would stop by. But Maria had a key, and if we asked Maria, she would open the church for us.

At that point, each person seated in the square (see large photo above, a record of that day) called out for Maria.

Their voices echoed across the piazza. They all looked up at one set of windows in particular, which were shuttered closed. No Maria.

We were about to give up hope, when we noticed workmen entering the sacristy at the back of the church. We followed the workers into their construction site and asked if, by chance, they had the keys to enter into the church. They did.

The workmen unlocked the sanctuary.

And voilà, there above the altar was a large painting – exactly as Lorenzo had described – with San Lorenzo on the grill.

It was a moving experience to finally see him.

[The church was very dark, hence my poor photo on left. The second lighter photo is courtesy of Poggio San Lorenzo.] 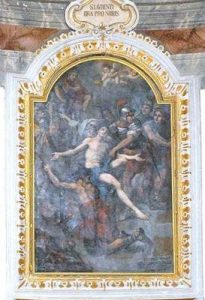 A small teaser for Verdi’s Flame

Years later, I started writing my first detective novel, Verdi’s Flame. The story begins on Opening Night of La Scala, which is always held on December 7, the Day of Sant’Ambrogio, the patron saint of Milan. The climax occurs on December 26, the Day of San Stefano, where a tradition related to the saint affects the action. (I can’t say more, it would be a spoiler…).

It occurred to me I could identify the saint days for each of the days from December 7 to December 26, and open the corresponding chapter with a tidbit written by or about that saint (but which had to relate somehow to the action in the chapter). I spent months doing the leg work to make this idea a reality – It was tremendous fun, a big puzzle.

I’ve always loved books that open each chapter with a teaser – Remember in The Ghost by Robert Harris, where each chapter begins with a blurb from the handbook Ghostwriting by Andrew Crofts? – And now I’ve written one. Exciting!

In that spirit, I close today with a tidbit for the saint day of today, May 17, the Day of San Pasquale Baylón.

Without schooling he taught himself to read and write,

And as a friar made a scrap book, still preserved,

Of discarded odds and ends

In which he jotted down in beautiful handwriting…

Lives of the Saints:

Poggio San Lorenzo (poggio means hill) is a town of 589 inhabitants in the provincia of Rieti, 60 kilometers from Rome. Its history dates to the twelfth century.  Every August 10, the saint day of San Lorenzo, the church of Poggio San Lorenzo is a pilgrimage site. The church’s origins are in the fourteenth century, but it was completely restructured in 1780, when a Roman tomb was found on the site.

San Lorenzo and his martyrdom on the grill are depicted in many paintings, hanging in many churches across Italy. One of the most famous is Martirio di San Lorenzo | The Martyrdom of Saint Lawrence, a 1558 painting by Tiziano Vecellio (Titian), now in the church of I Gesuiti in Venice. It so impressed Philip II of Spain that he commissioned a second version in 1567 for the basilica at El Escorial.

Historians debate whether San Lorenzo died on the grill or was beheaded. An excellent (and detailed) overview of this history is provided by Seton Hall University (pdf download). Well written – I recommend.

Many books on The Lives of the Saints have been published over time. Multi-volume works were written by Rev. Alban Butler (first published 1756-1759) and Rev. Sabine Baring-Gould (first published 1872-1877). Long out of copyright, many volumes of these works are available for download. The book I quote from, Lives of the Saints: Daily Readings by Augustine Kalberer, originally published by Franciscan Herald Press in 1975, is out of print. Used copies can readily be found online.

The Ghost by Robert Harris, a terrific thriller republished as The Ghost Writer (after the movie took that title), is available from its publisher Simon and Schuster.

The Postcard of Selci Sabino, where we eventually arrived after the detour to Poggio San Lorenzo, shows the view from the porch of Villa Vallerosa. A bed and breakfast / agritourismo run for many years by our friends Luciana and Luigi, Villa Vallerosa has spectacular views over the countryside of Lazio.