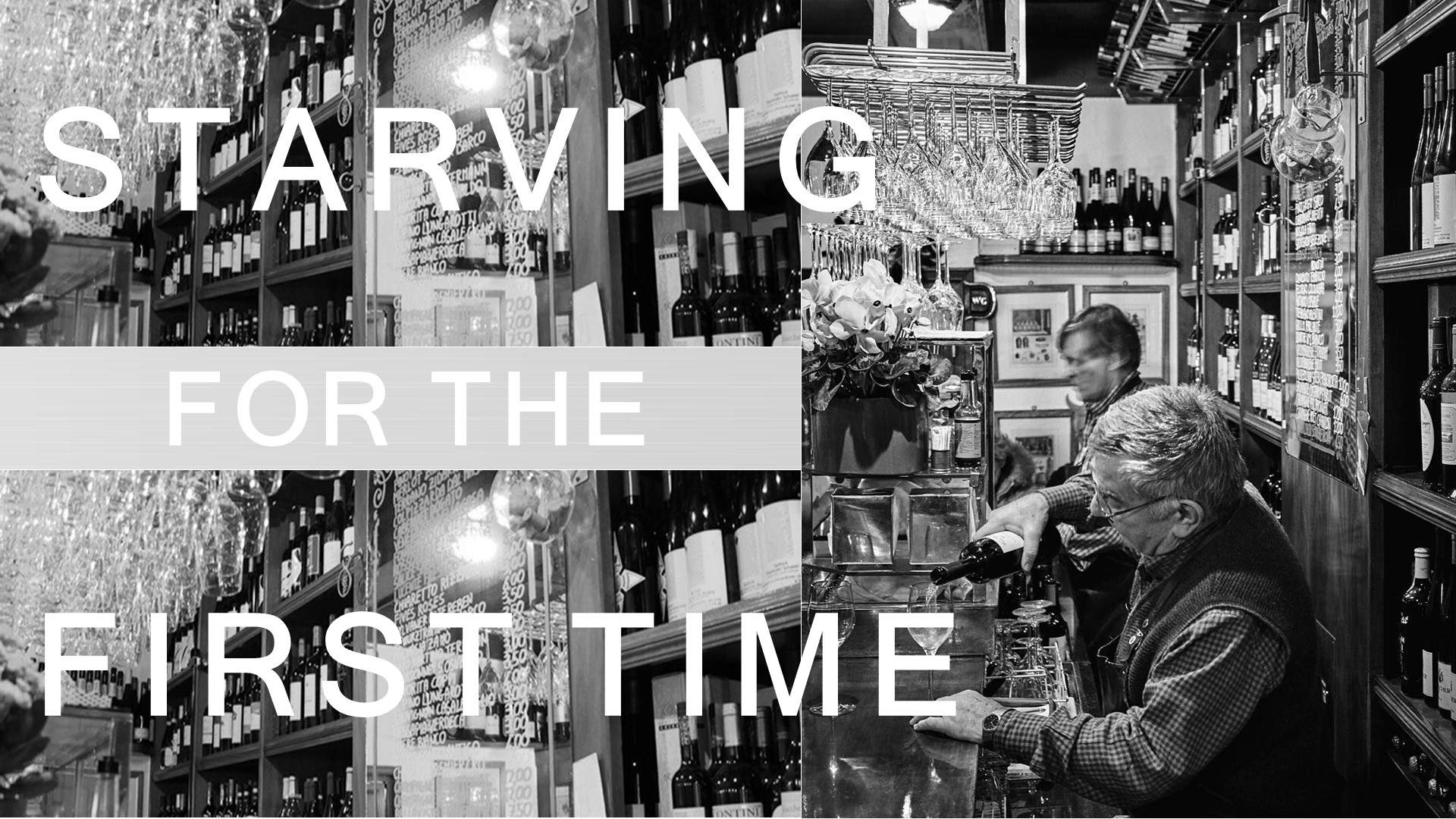 When I found myself watching over and over again the episodes of Stanley Tucci: Searching for Italy, I realized I was STARVING FOR ITALY.

Within a few days of the diagnosis, I decided to launch this blog and share my love and longing for Italy with others who suffer from the same condition.

We’ll cure ourselves together.

As I described in my inaugural post, I fell for Italy during a first vacation years ago to Milan, Venice and Cortina d’Ampezzo with my friend Janet.

When I returned home to Chicago, I dove into learning about all things Italian.

The place I loved more than any other was the enoteca of Cortina d’Ampezzo. After a day on the slopes, you would order an aperitivo and drink it standing, pressed together with others in that small space. There was constant motion as groups came and went. It was people watching at its best. It was life itself.

But more than anything, I needed to find a way to go back.

Here’s what I did:

This was not as easy as it sounds, since I had the classic American vacation of two weeks per year at my job, which I had just used up in February for that beautiful Italian holiday. But then I saw a cooking contest sponsored by the Chicago Tribune where the first place winner would go to the Tuscan cooking school of the then hot-chef-in-Italy, Giuliano Bugialli. I entered. The Chicago Tribune called to say I was one of the five finalists and invited me to the test kitchen for the cook-off. You can only imagine how excited I was.

Armed with a large number of homemade grissini to share with my competitors (see number 4), I headed to the test kitchens for a day of cooking. Alas, I did not win the trip, receiving only third place by the panel of Chicago restaurant chefs. But the Tribune staff loved my effort and reprinted the recipe many months later in December as one of the top ten recipes of the year. Which I didn’t even realize until weeks later, because – Spoiler Alert – I spent Christmas of that year in Italy with my new Italian boyfriend Lorenzo (see number 5).

So I did get back to Italy that year. Without needing to cook, only to eat. A very happy return trip, and the first of many to come.

The place I loved more than any other during that first trip was the enoteca of Cortina d’Ampezzo. This wine bar was the center of life in that skiing village. After a day on the slopes, you would go to the enoteca, order an aperitivo and drink it standing, pressed together with others in that small space. Conversations filled the air. There was constant motion as groups of people came and went. It was people watching at its best. It was life itself.

So when I got back to Chicago, I sent a letter to the leading Chicago restaurateur at the time, Rich Melman, who had among his many restaurants an upscale Italian place near the Water Tower called Avanzare. I described the amazing enoteca of Cortina and how it brimmed with life. I suggested Chicago needed one. Was he interested?

Rich Melman contacted me and we met at Avanzare one afternoon before it opened for dinner.  He explained that he did not go into business with outside partners, so I should not expect that. He also said that just because a concept works in Italy, doesn’t mean it will work in Chicago. Americans are different than Italians, he said. It was an interesting conversation.

The next year, Mr. Melman opened the casual Italian restaurant Scoozi in Chicago.  I like to think he had a thought or two about the enoteca in Cortina before designing the bar. I never inquired.

I should also mention that I came home from Italy with an eye towards investing in the production of fresh goat cheese, or caprino as it’s known in Italy. I took out a classified ad in (and subscribed to) the Dairy Goat Journal: “Chicago lawyer wants to invest in goat cheese production…” Unfortunately, the right opportunity did not present itself. And when I floated the idea later that summer with the new Italian boyfriend, he replied,

“But do you know how bad goats smell?”

I immediately signed up at my local community college to learn Italian, and I read only Italian literature that year, in translation of course.  Italo Svevo, Zeno’s Conscience and Oriana Fallaci, A Man were books I loved.  It would be years before I became fluent enough to read Italian books, or go to an Italian movie without subtitles.

And these book covers are such a reminder of all the cigarette smoking of those years, giusto? 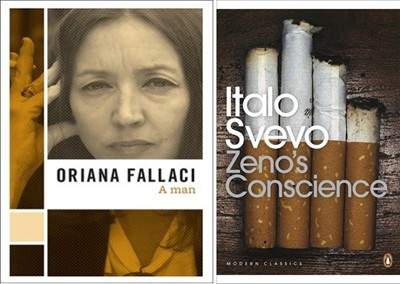 OK, this one is pretty obvious. Let’s just note that I changed my laundromat to one across the street from an Italian restaurant, so I could sit at the bar while my clothes washed and dried. And let me tell you, sipping a spritz is so much better than sitting and breathing in laundry fumes while your clothes spin.

I also bought a pasta maker, which turned out to be fantastic for making grissini, or thin Italian breadsticks. I never got the hang (or had the patience required) of homemade pasta, but I made grissini like crazy, using them to make friends in the Chicago Tribune test kitchens, and taking them to every dinner I was invited to, including a fateful evening in Lincoln Park…

And last, and certainly not least, I introduced myself to an Italian-American colleague at work, who I understood was interested in Italy and often spent his own vacations there. Chuck immediately recognized my STARVING FOR ITALY state, and kindly said he would invite me over the next time he had a dinner party with the Italians he had befriended in Chicago. He did, and it was there, on Chuck’s porch in Lincoln Park, Chicago, that I met – and yes, immediately began to fall in love with – the man from Milan who I have now been happily married to for thirty years. Oh, and I met Lorenzo’s sister Francesca at that dinner too, who was visiting from Milan at the time. When Lorenzo invited me to join him in Italy for Christmas at the end of that year, I met the rest of his family.

Now you know something about what I did when I first became enamoured of Italy. And it worked to tie me to the country forever. My understanding of Italy is more nuanced now than it was in those early days, but my affection for its spirited culture and for its people has never flagged.

The enoteca of Cortina d’Ampezzo is located on Via del Mercato 5. That’s owner Gerry Gaspari serving at the bar up top. Photo credit: Condé Nast Traveler

Scoozi, a restaurant operated by Lettuce Entertain You in River West, Chicago, closed in April 2014.

The Postcard of Cortina d’Ampezzo shows ski slopes in the surrounding Dolomites. Since that first trip with Janet to Cortina, I have become attached instead to the beautiful ski resort of Courmayeur nestled under Mont Blanc in the Valle d’Aosta, particularly since my brother-in-law Livio lives there. More on that to come. 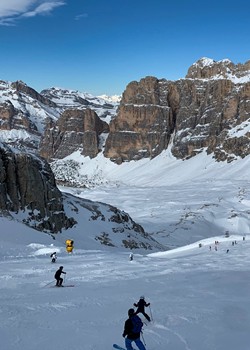 Skiing in the Dolomites