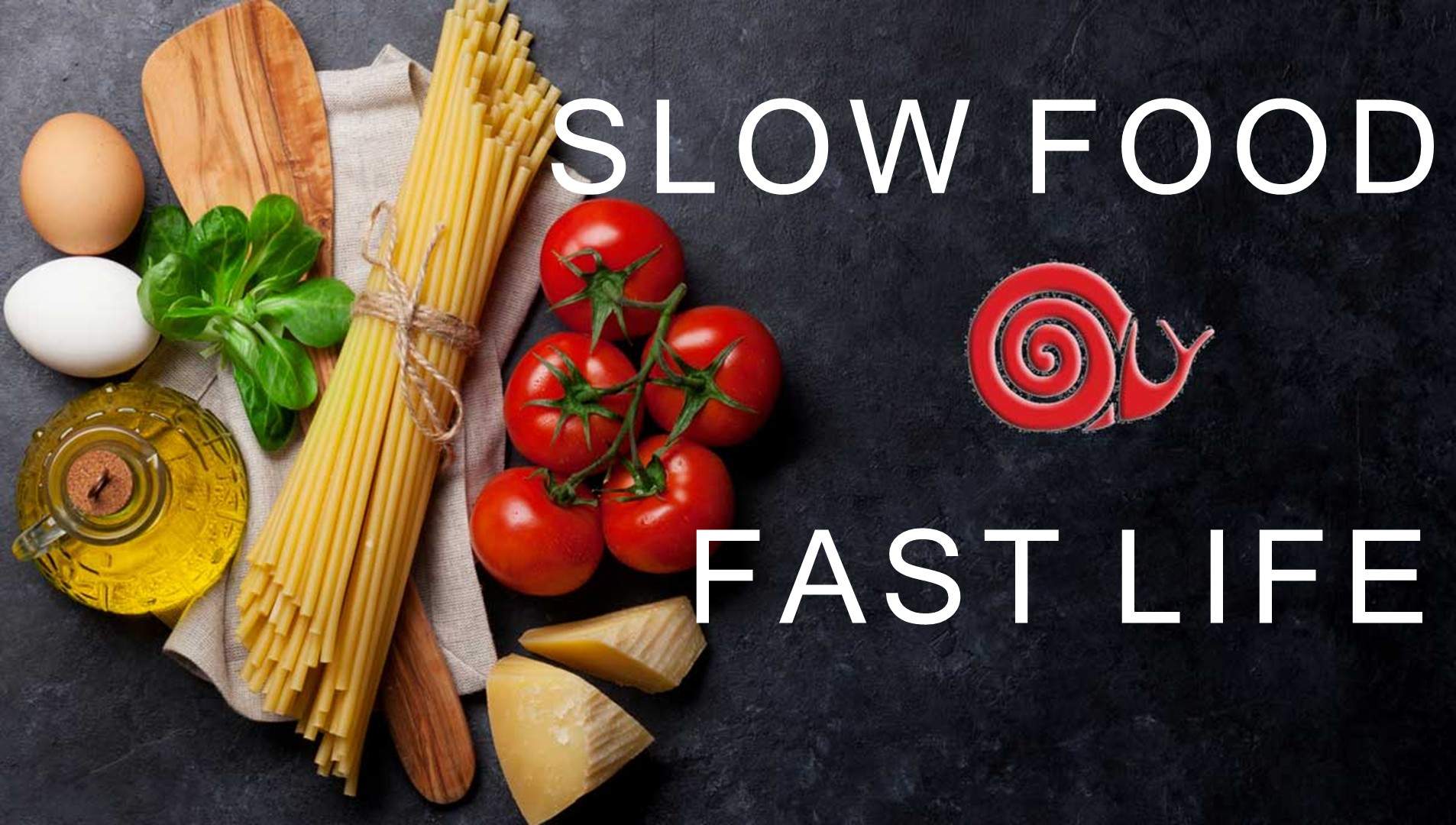 In the last post, Asparagus Kilometer Zero, I described the important themes of Milan Expo 2015 on food and sustainability.  And I set out to tell you about my favorite exhibits.

I managed to get through the first – about the wonders and potential of vertical farms in the city – when I needed to stop and go to bed. Then the Heat Dome arrived in Seattle, and my brain suffered from the 108 degree heat in my non-air conditioned office.

But I’m back. And ready to tell you about the most informative exhibit at Milan Expo 2015, by our old friends, the organization Slow Food.  First, do you know the amazing story of Slow Food?

OK, how many of you can boast of an Arcigola Slow Food membership card from the early 1990’s?

I forget which one of our serious food friends in Italy introduced Lorenzo and me to Slow Food – feel free to take credit in the comments – but it was an easy sell. Slow Food was a great organization in its early days, and while very different today, it’s still great.

Slow Food started in the 1980’s in the small Piedmont town of Bra (population 30,000), the hometown of founder Carlo Petrini. Petrini had for some time gathered his friends in a sort of eating club dedicated to local food traditions called Arcigola.

In 1986, the group organized a protest in Rome against the invasion of American fast food – McDonald’s at the foot of the Spanish Steps, to be precise – armed with bowls of penne in hand.  And a movement was launched.

The first manifesto of Slow Food followed in November 1987, signed by such intellectual luminaries as Dario Fo, the Italian writer and winner of the Nobel prize for literature.

The manifesto starts with the problem,

Speed has enslaved us, and we have all fallen prey to the same virus:

The Fast Life, which disrupts our customary way of life and assails us even in our homes, pushing us to eat Fast Food.

Against those who confuse efficiency with frenzy, we propose the vaccine of adequate amounts of sensual pleasures, to be taken with slow and prolonged enjoyment.

We start at the table with Slow Food. Against the debasement of Fast Food, let’s rediscover the richness and the aromas of local cuisine.

And closes with a final appeal,

Slow Food is an idea in need of supporters to become a slow and steady international movement, symbolized by the snail. 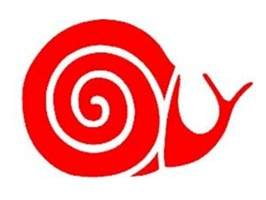 In its initial period, Slow Food focused on defending regional culinary traditions and eating pleasure through the promotion of quality local food and wine in Italy. It started publishing guidebooks to osterie and trattorie which adhered to the principles of Slow Food, and held regional events showcasing local food and wine production. One of the earliest annual events was a fall cheese fair in Bra, which continues to the present day (a personal favorite).

Petrini soon delivered on the ambition to create an international movement by founding Slow Food International – THE INTERNATIONAL MOVEMENT FOR THE DEFENSE OF AND THE RIGHT TO PLEASURE – in Paris at the Opéra-Comique in December, 1989.

From there, the organization grew steadily, both geographically and in the scope of its programs, until reaching the considerable conglomerate it is today.

Today, Slow Food operates globally through a network of local chapters, present in over 1600 communities worldwide.

The Slow Food manifesto has been updated to marry its original focus on the protection of local food traditions with issues of sustainability and equity.

Here’s the new statement of the problem,

The food production and consumption systems most common today
are harmful to the earth, to its ecosystems and to the peoples that
inhabit it.

And the appeal for a common solution,

Each of us is called upon to practice a broader concept of food quality based
on three prerequisites.  Quality food must be:

1)  Good.  A food’s flavor and aroma is the fruit of the producer and the choice of raw materials and production methods…

2)  Clean.  Every stage in the agro-industrial production chain, consumption included,  should protect ecosystems and biodiversity and safeguard health…

3)  Fair.  Social justice should be pursued through the creation of conditions of labor respectful of man; through respect for cultural diversities and traditions…

Taking a quick tour of the sprawling Slow Food pavilion at Milan Expo 2015 will give a better view into the scope of its projects and its advocacy.

How can we feed the planet, guaranteeing good, clean, and fair food for everyone?

It stressed the need to protect biodiversity in achieving that goal, noting that food systems which are uniform or lacking in biodiversity are fragile.  And a giant hourglass warned, 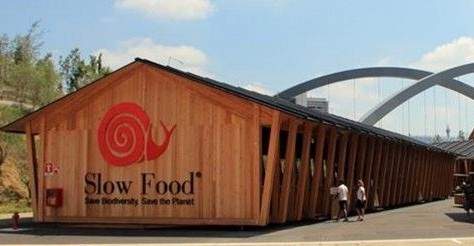 Wait, what do the arches remind you of?

A flashback to the early days?

A series of posters set up the challenges facing the global food system, with corresponding exhibits:

The Future of Food Security, The Last Forest of Paraguay, The Pillars of Humanity, The Quinoa Boom, School For Food, Industrial Fishing Versus Traditional, Fishing Rights for All, What a Waste!, The Food Supply Chain, and The Water Crisis that Will Be.

Let’s take a look at the Quinoa Boom, the one Lorenzo and I still discuss… 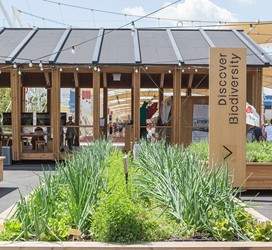 THE QUINOA BOOM and THE LAW OF UNINTENDED CONSEQUENCES

One of the interesting aspects of the quinoa story is the role Slow Food itself played in triggering the unintended consequences.

The story is this:  During the period 2005 to 2015, quinoa was “discovered” and promoted as a healthy, super food in the developed markets of the US and Europe. Much richer in protein and essential amino acids than other grains, quinoa became a highly desired food, especially among vegetarians.

Slow Food even partnered in 2013 with FAO, the Food and Agriculture Organization of the United Nations, to promote quinoa with a “Quinoa in the Kitchen” initiative during the International Year of Quinoa. The goal: To make the super food quinoa as commonplace as pasta or rice.

So what happened?  Quinoa is primarily produced by Bolivian and Peruvian farmers. 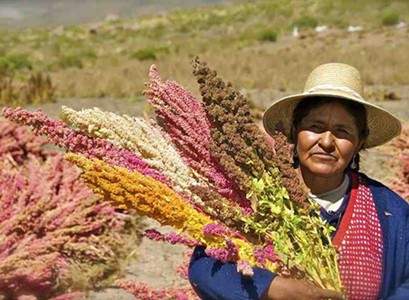 With the increased demand leading to increased prices for quinoa (prices quadrupled over the period), the farmers responded. They reduced the number of crops they produced overall to concentrate on the quinoa favored by these new consumers.

And since the export demand focused on very few of the 3,000 different varieties of quinoa, the farmers abandoned most of those varieties. 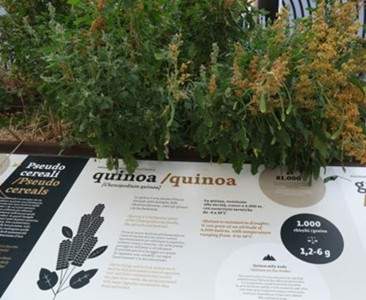 The undesirable outcomes? To start, as a result of this decrease in biodiversity, the soil became impoverished, with more erosion and fewer nutrients. And the farmers became subject to greater risk of crop failure since they had abandoned varieties more adaptable to climate change. There was also fear that the increased prices for quinoa had taken it out of the reach of local consumers, but subsequent studies showed that overall, these communities experienced positive impacts from the rise of quinoa prices.

Bottom line, these issues are complicated. But we all have a role to play, our food choices matter.

I love Slow Food. If you’re so inclined, I encourage you to get involved.

And the next time you’re in Piedmont, stop by the wonderful town of Bra and eat a lovely, leisurely meal. (It’s been a special place for Lorenzo and me ever since a memorable New Year’s Eve dinner there with good friends in a blizzard, when we almost didn’t make it back to our bed and breakfast on the top of the hill in Barbaresco…)

AND DON’T FORGET – The Slow Food CHEESE event is back in Bra this year, September 17-20. Stop by if you’re in the neighborhood! I recommend!

Alla prossima volta, until next time, A. S. Furbetta

The History of Slow Food has been covered extensively. Here’s a fun article from 1990 in the LA Times. Also, coverage from The Nation and Italy magazine.

The original Manifesto of Slow Food is available in English as a downloadable pdf, as is the current Slow Food Manifesto.

Slow Food Editore, the publishing arm of Slow Food, continues to publish gastronomic guides (wine, olive oil, cheese, etc.), regional recipe books, restaurant travel guides, educational textbooks and more. Based in Italy, the majority of books are available in Italian only, however a few key books have been translated into English.

If you’re traveling to Italy, you might consider the Slow Food app available for both android and iphones, Osterie d’Italia 2021 ($9.99), with its current restaurant recommendations.

The issues around Quinoa are covered here by National Public Radio.

The postcard from Piedmont shows the Friday market in Bra on Corso Garibaldi. 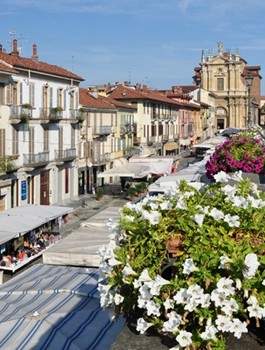