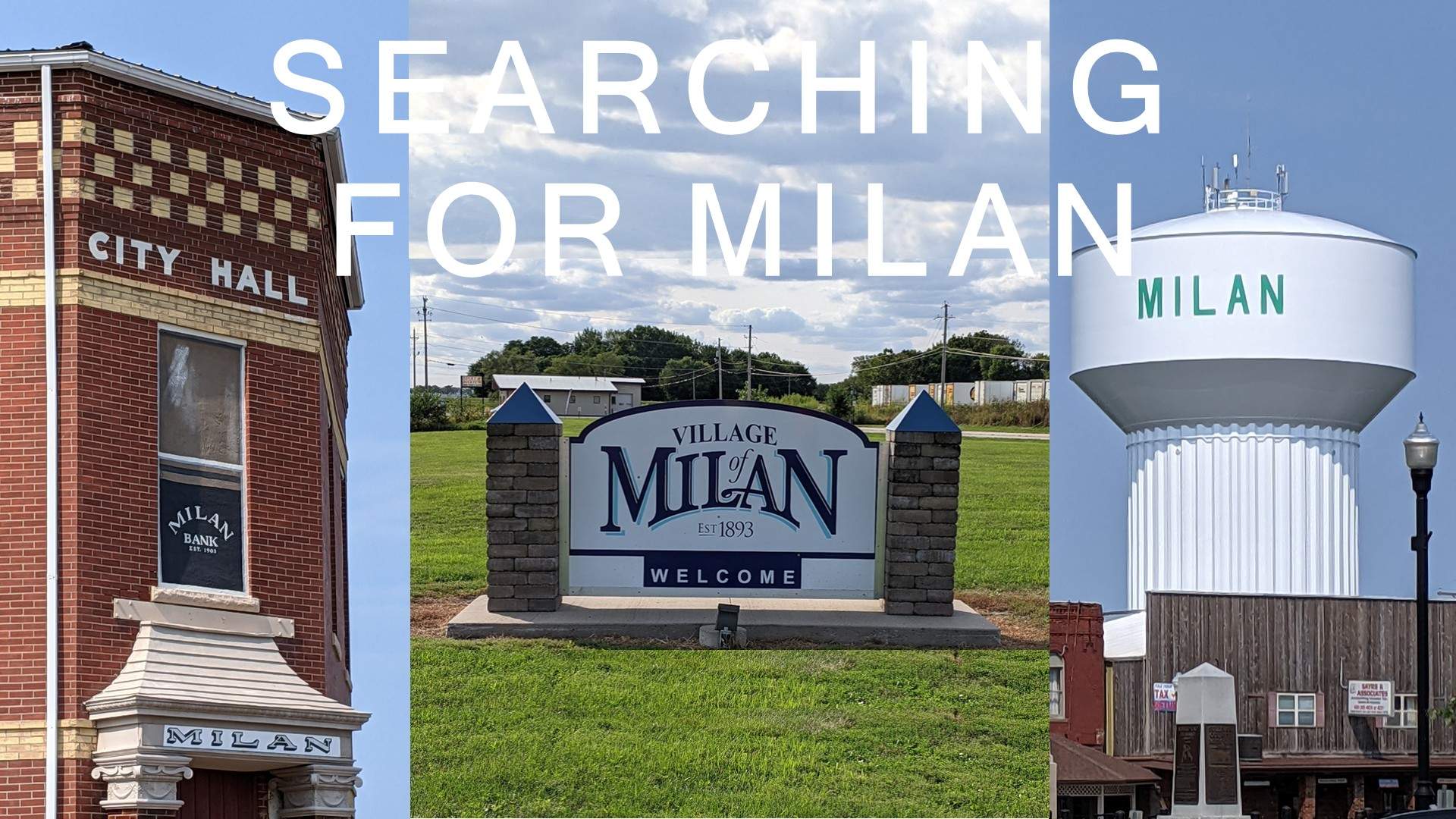 When I posted last week to say Buon Compleanno to family and friends,

the Number One Question asked was:

WHAT DID YOU DO DURING YOUR BREAK FROM

WE WENT SEARCHING FOR MILAN IN THE U.S.!

In the process, I learned about a very full day in the history of the real Milan – December 15, 1807.

What happened?  Teaser:  It involves Napoleon (details below)!

Last September, Lorenzo and I embarked on a road trip from Seattle through the Midwest.

While mapping our route, I noticed there were an awful lot of towns named Milan scattered around. Why?  Why do so many states have a city named Milan?

So we made it our mission to Search for Milan after being away so long from the city we love.

IMPORTANT:  Milan MI is the second most mispronounced city in America! Pronounce it MY-lon (not mee-LAHN)! 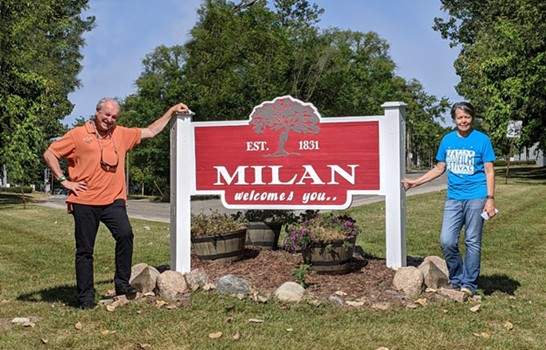 The story of how Milan MI got its name(s) is crazy. The first name came in 1833 when a Post Office was opened by a Mr. Hack. He chose FARMERSVILLE because the town was filled with farmers.

When Mr. Woodard became the second postmaster in 1834, he decided to name the town for himself, WOODARD MILLS. So too, the third postmaster Mr. Tolan, who in a fit of egotism renamed it TOLANVILLE. And then, a group of residents chose the name MILAN because the surrounding township had already been named by immigrants after their Italian home.

For the next thirty-plus years, all four names were used, making the efficient delivery of mail difficult! Then finally, in 1885, Milan was officially established as a village. WHEW! 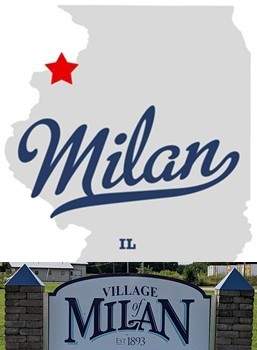 MILAN, ILLINOIS: A Town named in a Watch Swindle

If the naming of Milan MI seems crazy, the story of Milan IL is bizarre. Here’s the short version.

The town was first named CAMDEN MILLS in 1848 for Mr. Camden who sold the land for settlement. In 1870 the town got caught up in the sale of shares to move a watch factory from Michigan. It was called the grandest project ever for the region.

In the excitement, Camden Mills changed its name to MILAN to give the watch a European name, thinking it would boost sales.

Too bad, the watch affair was all a hoax, but the name remained.

This is my favorite story by far, given its tie to Milan (IT) history.

The first name of the town was PHARSALIA, which was a problem because no one knew how to spell or pronounce it.

Then the second mayor, Mr. Witter, remembered that as a boy he had studied the Milan Decree of 1807, and suggested the name MILAN for the town. It was unanimously adopted.

So what was the Milan Decree of 1807?  Let’s close with some history about the real Milan, shall we? 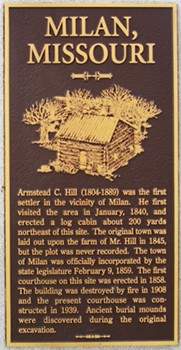 When I dug into the Milan Decree of 1807, I learned that Napoleon – who by then, had crowned himself King of Italy and Emperor of France – had a very full day in Milano on December 15, 1807.

First, Napoleon dedicated the Arena di Milano, which he had commissioned from the architect Luigi Canonica in the style of an amphitheater, to recall the Roman Empire.

To mark the occasion, and to celebrate the birth of his son, Napoleon joined with 18,000 other spectators to watch a naval battle (or naumachia) performed in his honor. 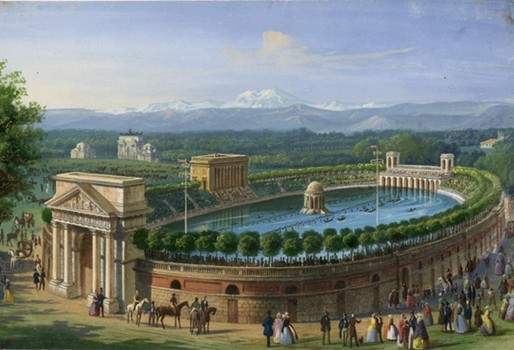 They flooded the Arena from the nearby Nirone river so Napoleon could watch a simulated naval battle!

These are two paintings of what the Arena looked like that day. 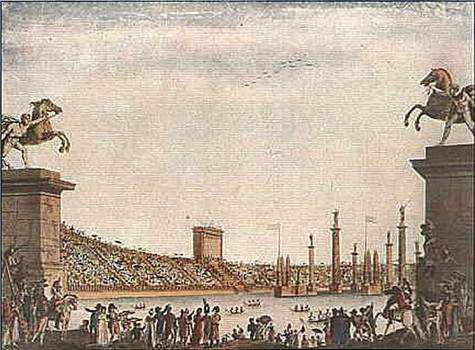 Then, perhaps feeling aggressive after the naumachia, Napoleon signed the Milan Decree.

The Milan Decree was an escalation in an economic war with England. Napoleon had, in an earlier decree, established a trading blockade of England. In the Milan Decree, he increased the sanctions to seizing ships from any nation found to be violating the blockade and trading with England.

You can think of the Milan Decree as a precursor to the escalating economic sanctions currently being deployed against Russia. Historians say that American ships largely disregarded the decree. But since England had the more powerful navy, Napoleon could do little to enforce it.

I wonder how Napoleon dined after this momentous day? According to the memoirs of his valet Louis Constant Wairy, Napoleon – like his admirer Stendhal – was a lover of cotoletta.

I don’t want to neglect our Roman friends, since we did make a quick stop in Rome, Iowa. Population, 114.

Quick is the only kind of stop you can make in Rome, IA with its very small grid of streets, four streets by five.

Rome is located on the Skunk River, need I say more? 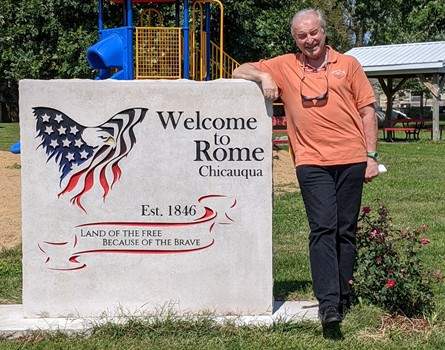 Until next time, alla prossima volta,  A. S. Furbetta

The text of the Milan Decree of 1807 can be downloaded (pdf) here in English and in Italian.

Milan MI:  The other nine most mispronounced American city names are listed here.

Milan IL:  The full story of the watch swindle in Milan Illinois is told here.

Rome IA:  An Iowa blogger visited Rome Iowa and was so excited he took pictures of every building. See them here.

The Arena of Milan is still in use as a stadium, located within the central Parco Sempione. Sadly, it is no longer flooded for simulated naval battles.

The Postcard from the real Milano: In 1802, Napoleon commissioned from Antonio Canova, a marble sculpture portraying himself as the god Mars the Peacemaker. You see Napoleon’s head on top of an idealized body which was definitely not his (“too athletic,” Napoleon complained).  The original marble sculpture was purchased by the British government in 1816 when France was ridding itself of Napoleon statues after his downfall. It can be seen in the Wellington Collection at the Apsley House museum in London. The bronze copy pictured in the postcard is located in the courtyard of the Pinacoteca di Brera, a must visit museum near La Scala in Milano. 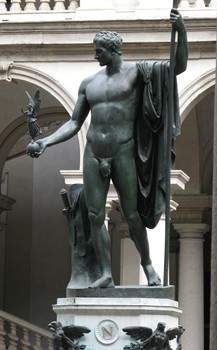