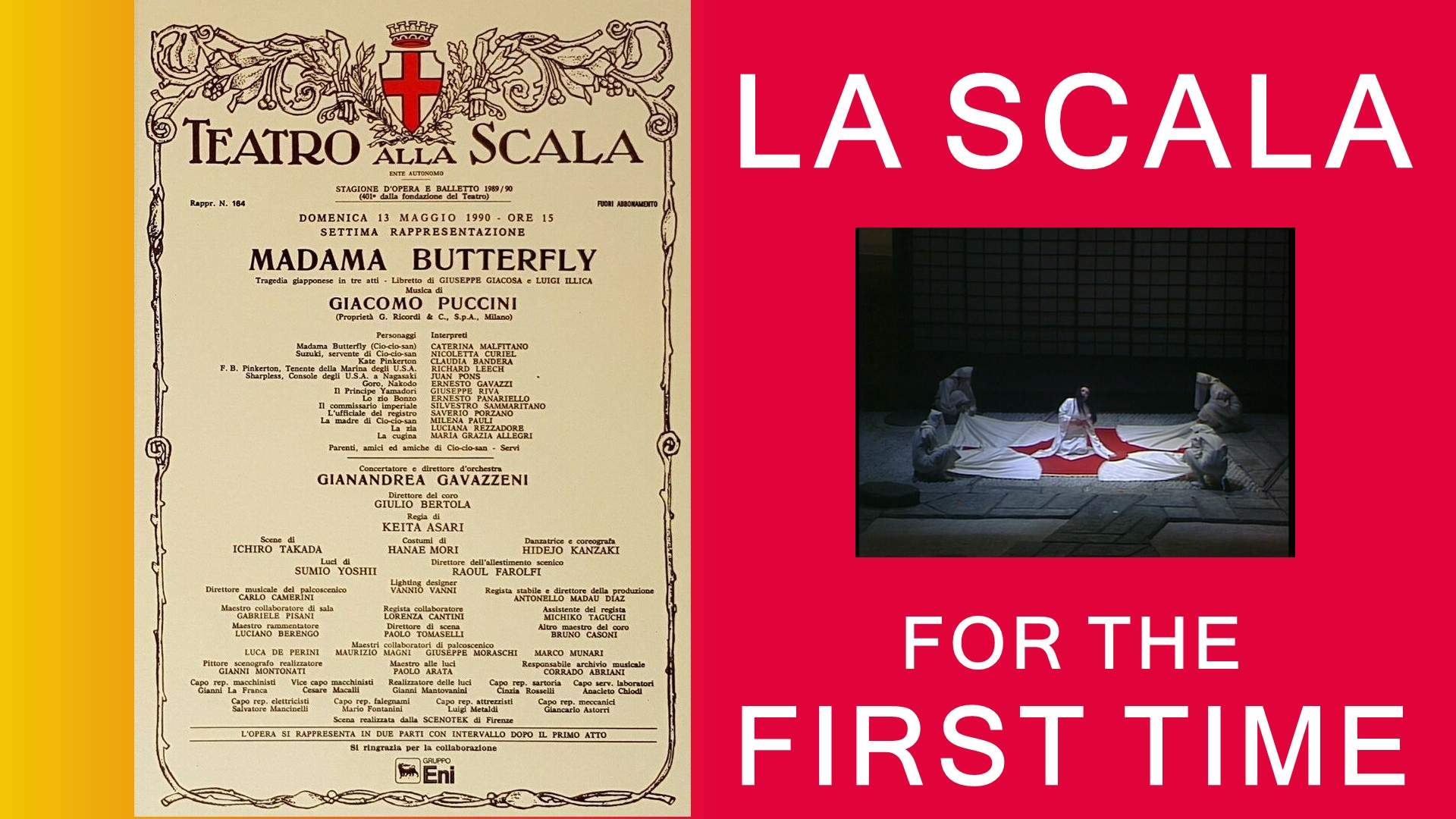 I grew up with parents who loved opera. Every Saturday afternoon, my father would set up a card table in the family room with his large FM stereo radio. Then he would sit down with the ever-present piles of paperwork from his office and work to LIVE FROM THE MET. Every Saturday.

When my mother stopped by Chicago to first meet the Italian boyfriend, I arranged the introduction at the Lyric Opera of Chicago – we saw La Traviata by Verdi – with a get-to know-you repast afterward at Pops for Champagne. It worked, Mom really liked Lorenzo.

So it was enormously exciting, during that first Christmas trip to Italy thirty years ago with Lorenzo, when his sister Francesca gave us tickets to La Scala, for Madama Butterfly by Puccini.

It was La Scala for the First Time.

Our seats were in the loggione, the name for the top two tiers of seats in the upper gallery of La Scala.

In the picture, the loggione are those top two dark rows, where the man in the white shirt peering over the rail appears the size of an ant (just as the performers on stage appear to him). No lush red silk covers the walls, nor are there soft red velvet chairs to sit on, as found in the palchi or boxes of the four rows below. Just two long rows of wooden seats, hard wooden seats.

But I’ll get to the story of the loggione in a minute.

First, here is what I remember of Madama Butterfly at La Scala.

It was a thrill to be at La Scala, start to finish. The music and singing were glorious, the settings and costumes spectacular.

And I recall vividly the climax of the opera as it is pictured above. 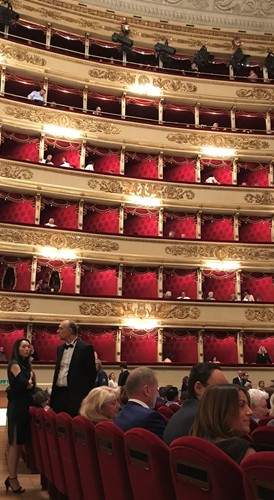 Madama Butterfly, in despair that her love Lieutenant Pinkerton has deserted her, kills herself in the final scene. Dressed in white, for the purity of her soul, Madama Butterfly is surrounded by her attendants, also in white. White sashes cover the stage. Then, at the precise moment Madama Butterfly stabs herself, she opens and drops a red fan and the attendants gracefully pull back the white sashes to reveal red sashes representing Madama Butterfly’s blood.

It was stunning, moving, unforgettable.

There was, however, one disappointment to the evening.

Ticketholders to the loggione enter through a side entrance – not through the main porticos of La Scala – and have no access to the beautiful lobbies of the lower levels during  intermissions. You can’t visit the imposing statues of composers or be dazzled by the chandeliers. You can’t mingle with the tuxedo’d occupants of the boxes and orchestra seats. You feel set apart, second class.

But you are part of a storied history – 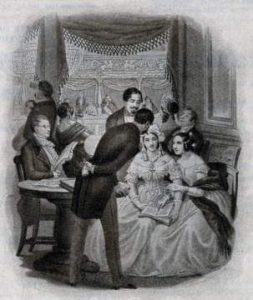 From the time La Scala opened in 1778, the aristocrats of Milan sat in the plush palchi. Until 1920, the boxes were owned by wealthy families as private property – our friend Stendhal wrote in 1816 that they could cost as much as 25,000 francs, or the price of a Paris apartment – and were furnished as if a private salone.

As shown in this 1844 drawing, people often gathered in the palchi for reasons other than opera. Political intrigues, social and romantic engagements, even gambling games were common.

Then, after 1920, when ownership of the boxes was transferred to La Scala, the same families bought pricey season subscriptions for the same spots.

As a result of this history, opera aficionados have long sat in the loggione – opera lovers who have been coming to La Scala for years with their scores and libretti in hand, never missing an opera. Opera lovers who are opinionated, who impose their own high standards on the performance.

For example, Lorenzo and I bought same day loggione tickets to an otherwise sold out recital by the Italian tenor Vittorio Grigolo, who at the time had built a strong reputation at the Metropolitan Opera. This was his first appearance at La Scala. The loggionisti sitting near us were not impressed, Grigolo was too dramatic and used too much vibrato for their taste.

During intermission, we listened as the loggionisti concluded Grigolo’s voice was better suited for the local county fair than for La Scala.

one of them said, ending the discussion. They did not boo him.

Throughout the history of La Scala, famous accounts, at times infamous, exist of loggionisti booing mercilessly the performers or conductors or directors. Such as in 2006, when the tenor Roberto Alagna walked off mid-scene in Verdi’s Aïda after being booed, with his understudy being rushed on stage in jeans to continue on. Alagna never recovered his reputation in Milan for walking out, and – perhaps needless to say – has not performed at La Scala since.

Even the beloved Luciano Pavarotti was booed on Opening Night of La Scala in 1992 when his voice cracked on the high notes in Verdi’s Don Carlos. (He never sang the opera again.) When asked later about the experience, Pavarotti said this of the loggionisti:

I think the loggionisti are people who live to go to the opera every night. They give all their love to the opera. They think they are the ultimate judge of what is going to happen there. And they think to have the right to applaud or to boo. And if you want my opinion, they are right.

Before closing, I need to return to my parents and their love of opera, to give another small teaser for Verdi’s Flame.

Lorenzo and I happened to visit my parents on a weekend when they had subscription tickets to a Los Angeles Opera performance of La Bohème by Puccini. We of course went too. Guess what, Roberto Alagna was the lead tenor, a couple of years before the infamous incident at La Scala.

We first attended a lecture, where we heard about a temptuous relationship between the composer Puccini and multiple librettists for the opera (librettists are those who write the verses).

The lecture got me thinking – we generally associate operas with the composers, but know little about the librettists. But without librettists writing the story in verse, there would be no opera. I was intrigued by the seeming invisibility of the librettists (unless you’re an opera buff), and the nature of the working relationship (difficult, according to the story of Puccini and La Bohème).

I started reading about the librettists who worked with the great composers. I soon discovered the complex – and fruitful – relationship between Giuseppe Verdi and Arrigo Boito, the librettist for the final two Verdi operas, Otello and Falstaff. I wanted to tell their story. But how?

Then I had an idea. I could do something similar to Possession by A. S. Byatt, one of my favorite novels. Possession is a story of two academics in England trying to solve a mystery concerning two Victorian poets. The relationship of the two academics changes markedly over the course of the story.

I could have an opera impresario, Roberto Rosso, and a detective, Francesca Franchi, trying to solve a mystery of who burned down La Scala after a controversial Opening Night performance of Otello. The loggionisti could behave badly. A piece of the Verdi and Boito story could surface during the investigation. And the relationship of Rosso and Franchi would change over the story.

Verdi’s Flame was borne. Thanks Mom and Dad for being there at the beginning, for providing the inspiration.

The Metropolitan Opera continues to broadcast opera every Saturday afternoon at 1 pm ET. You can listen from your local radio station, or live stream the radio broadcast from WXQR radio in New York. An interesting history of LIVE FROM THE MET is here.

La Scala (in partnership with other institutions) launched an exhibit online in 2020, Nei Palchi della Scala, 1778-1920 | In the Boxes of La Scala. The exhibit makes available extensive research on the ownership of the palchi from 1778 to 1920. The searchable database (in Italian only) is available to investigate online, with incredibly detailed descriptions of the people and their history. The catalog, in both Italian and English, is available to read online. (If you have trouble advancing a page, play with the zoom.) The catalog opens with this quote from Stendhal, “Is it raining, is it snowing outside la Scala? What does it matter? All the best company is come together in 180 theatre boxes.” An amazing piece of Milan history.

Same day ticket sales for seats in the loggione at La Scala (back row, top loggione) are made available through the Accordo association. The process is complicated! (to prevent scalpers) It involves lining up at two different times the afternoon of the performance, providing identification, and finally an hour before the performance, buying a ticket for approximately 15 Euros. These tickets are available even for performances that are otherwise sold out, and for Opening Night (on December 7, the day of Sant’Ambrogio). The process is described by La Scala under the heading “140 balcony seats” here.  BTW, don’t buy tickets from scalpers.

The clip of Roberto Alagna storming off the stage in Aïda is priceless for the look of surprise on mezzo-soprano Ildiko Komlosi‘s face when the understudy shows up in jeans. The show must go on! Vittorio Grigolo has been released from the Metropolitan Opera and the Royal Opera based on investigations into improper conduct. He continues to perform at La Scala, including a live-streamed recital last month, February 21, 2021.

The pre-performance lecture on La Bohème was given by LA opera guru, Alan Chapman. I have looked hard for a copy of the lecture online, but have never found one.

Possession by A. S. Byatt, winner of the Booker Prize, is still one of my favorite books, and is available from publisher Penguin Random House.

Pops for Champagne is still going strong at its “new” (since 2006) location at 601 N. State St., Chicago. I recommend. Our memorable evening with Mom was at the old (1982-2006) location at the corner of Sheffield and Oakdale in Lakeview. Lorenzo and I still laugh over the confusing conversation we had about wild boar pâté in Italy (you had to be there…)

The Postcard of La Scala peeks through to the crest of La Scala and the beautiful antique clock above the proscenium. 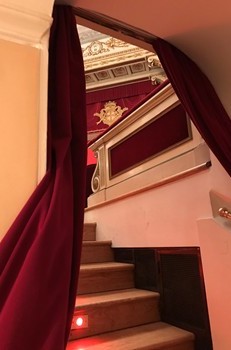