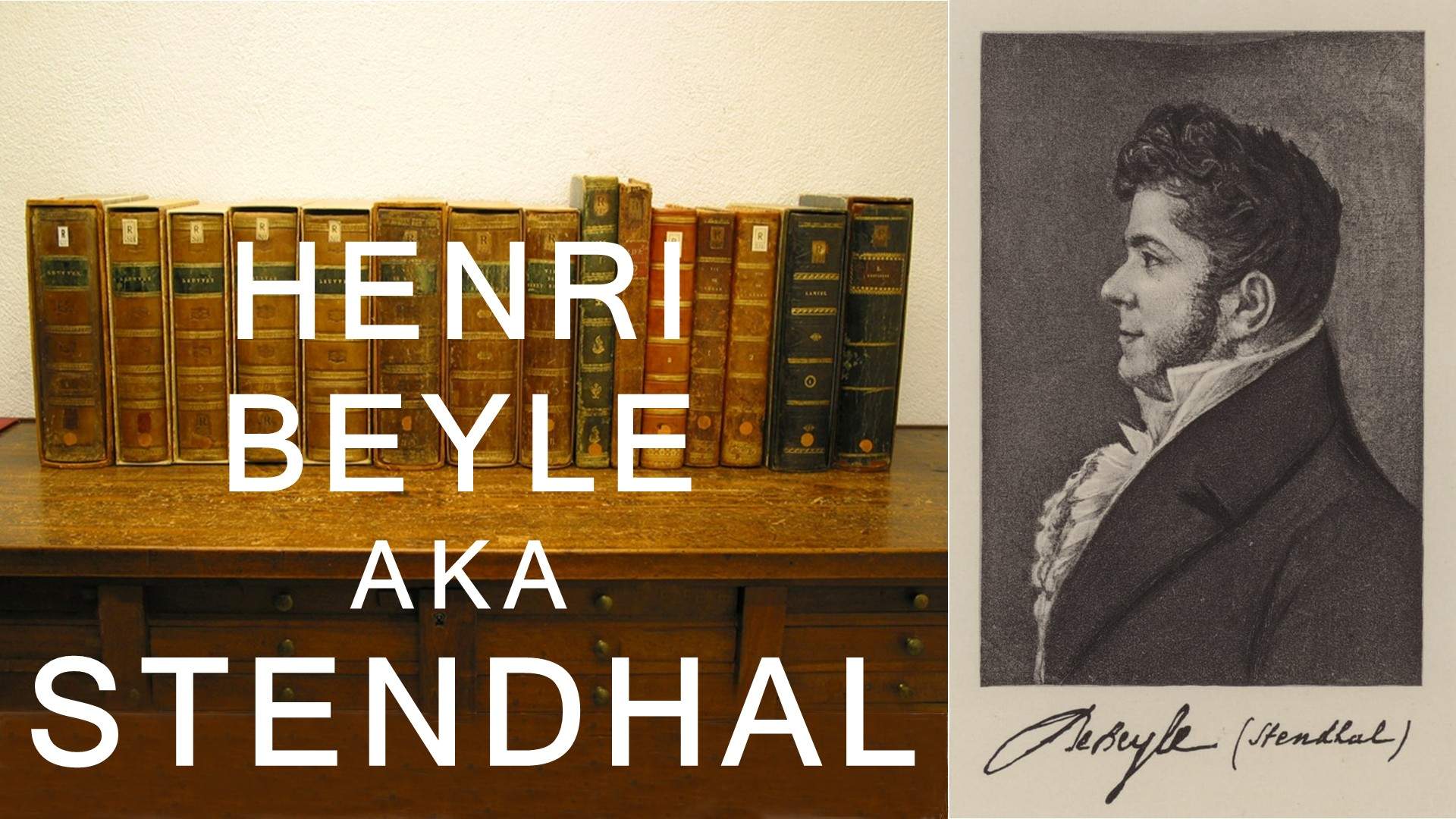 Ever since since I arrived in Milan for the first time in May 1800 I have loved that city.

There I knew the greatest happiness and the greatest pain; there above all I had my first experience of pleasure, which makes a place a home.

There I desire to spend my old age and there I hope to die.

Reading and writing are my passions. So from the start, I knew one focus of STARVING FOR ITALY would be to highlight books and introduce authors.

This debut post in the Letterario | Literary category is dedicated to Marie-Henri Beyle, aka Arrigo Beyle, aka Anastasius Serpière, aka… I could continue that sentence for some time, since the man adopted over 200 (that’s not a typo, over two hundred!) pseudonyms for his writing.

But he’s known to the world by his pen name Stendhal – or Baron de Stendhal as he styled it.

I fell for Stendhal years ago when I first read the words above. Many foreign writers have traveled to Italy and written rapturously about her. But Stendhal was the first great writer I encountered who fell in love with Milan. Like I did.

Stendhal, after an unhappy childhood in Grenoble, escaped to Paris in 1799 at the age of sixteen. In search of experience, he was already determined to become a literary success, the successor to Molière.

Soon penniless and ill – and very disillusioned – Stendhal was rescued by a cousin who got him a job in Napoleon’s Ministry of War. In May 1800, Stendhal was ordered into the reserve army and sent to follow Napoleon, who had just crossed the Great Saint Bernard pass into Italy.

“And so, on the 7th of May, 1800, we find Henri Beyle, seventeen years of age and perched with desperate insecurity astride a bay horse, engulfed in the baggage-train of that extraordinary [Napoleonic] army. For the first time, Stendhal was headed southward into Italy.”

Stendhal felt danger for the first time as he crossed over the mountain pass into Italy, his lame horse barely able to navigate the rough terrain next to precipitous drops.

Then, after surviving intense fire from the cannons at the Forte di Bard while advancing through the Valle d’Aosta, Stendhal arrived in the town of Ivrea in Piedmont.

In Ivrea, he went to an opera by Domenico Cimarosa, Il Matrimonio Segreto (The Secret Marriage). He experienced sublime happiness.

“To live in Italy and listen to such music became the basis for all my thoughts,” Stendhal wrote in the autobiographical The Life of Henry Brulard. 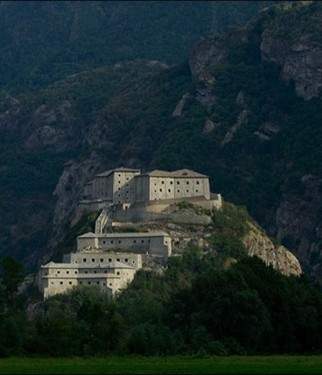 Stendhal soon reached Milan, felt vividly that “here indeed was Beauty,” and pursued his goals with gusto for eighteen months, before being sent back to France by the Napoleonic service.

Over the next forty years of his life, Stendhal would return to live in Italy five more times under varying circumstances. Milan remained his great love, although when the Austrian occupiers of Milan in 1821 suspected Stendhal of being an agent provocateur and stirring up trouble, he was banished from the city. But Stendhal left with his idealized memories of Milan which found their way into his writing.

Two passions dominated Stendhal’s time in Milan. The first was his search for romantic love, which over several stays in Milan was channeled into the pursuit of a Milanese woman, Angela Pietragrua. It took eleven years, but Angela finally submitted to his advances (according to his diary) in 1811, after which he lost interest.

The second was La Scala, where Stendhal spent most of his evenings.

In the beginning, without money and dressed shabbily, Stendhal was constrained to occupy the low-priced pit as the elegant Milanese assembled in their boxes above for a social evening.

He could only look on enviously, but with the benefit of being able to devote his attention to the opera, which he adored (and would lead to a biography of Rossini).

As Stendhal later wrote, “If ever I amuse myself by describing how my character was formed by the events of my youth [he did, ed.], the Teatro della Scala will be in the front rank.”

Stendhal never lost interest in La Scala, his love never dimmed. As he wrote his sister years later after an evening there,

“I can only say that my admiration is undiminished. I would call La Scala the world’s foremost theatre, because it is the one which gives the greatest pleasure by means of music. It is impossible even to imagine anything greater, more magnificent, more imposing, and newer in the whole of architecture. Now I am condemned to feel an eternal disgust for our [French] theatres…”

2)  Stendhal was an Adventurer, a Bon Vivant, a Gossip, and well, an Eccentric

I’m going to say you already have a good introduction to Stendhal’s character from the description of his entry into Milan. As his circumstances improved, Stendhal rose through Milanese society, and his writing reflects his psychological acuity – and propensity towards gossip – in moving through that world.

I urge you to pick up a book on or by Stendhal to learn more, while asking your indulgence to tell one last anecdote.

Stendhal wrote thirty-six wills, or thirty-six that are known. In many of them, Stendhal made a specific request about his tombstone, and sketched what he wanted. The same request is memorialized in Memoirs of Egotism:

In all my life I have loved only three men passionately: Cimarosa, Mozart and Shakespeare.

In 1820 when I was in Milan, I considered having that statement engraved on my tombstone. For days I pondered over the wording, certain I would never find peace except in the grave.

I decided on a marble tablet in the form of a playing card, with this inscription: 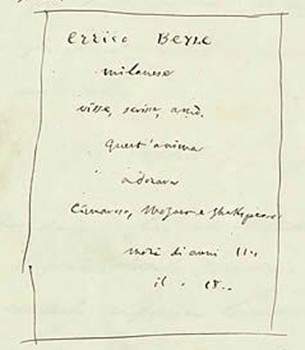 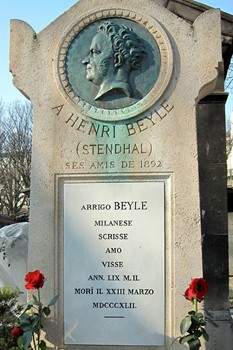 Stendhal got much of his wish, even if it is hard to see a playing card on the tomb.

But let’s turn to the real test of loyalty for any author, recommendations of Stendhal’s writing.

Stendhal said he wrote fast, so as not to lie.

Much of his writing was published posthumously.

Here then are recommendations from my Stendhal bookshelf. 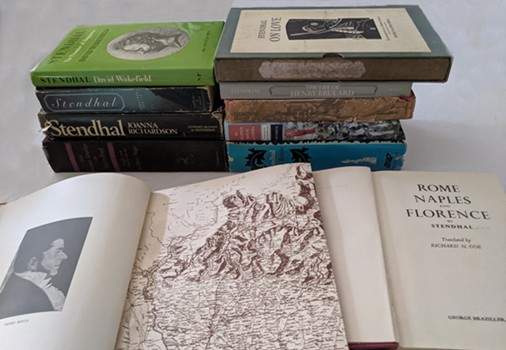 The Charterhouse of Parma, novel

Any list of Stendhal’s writing must start with his masterpiece.

Stendhal dictated his last novel between November 4 and December 26, 1838, shutting out visitors for the fifty-two days it took to write (!).

A complex tale of political intrigue set in Italy, the story opens with Napoleon’s entry into Milan in 1796. The protagonist Fabrice del Dongo, who goes off to fight at Waterloo, is no doubt the Henri Beyle of seventeen with Napoleon’s army. Or the idealized boy Stendhal wishes to have been – generous, warm, not bitter. The novel draws on a lifetime of experience, from youthful optimism to middle-aged disillusionment.

Known for psychological insights more than style, Stendhal said of fiction, “A novel is like a bow, and the violin that produces the sounds is the reader’s soul.” 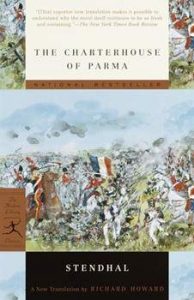 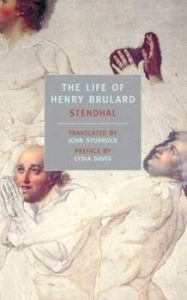 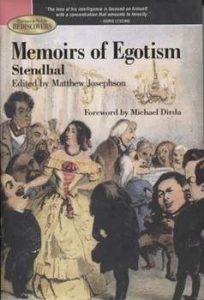 Memoirs of Egotism and The Life Of Henry Brulard, autobiographical writing

Memoirs of Egotism collects vignettes from Stendhal’s life, and is my favorite of the two.

Henry Brulard relates his life starting with childhood in more classic memoir fashion. It ends with perhaps the most complete telling of his entry into Italy and then Milan in 1800.

First published in 1817, this book is badly titled since the first half covers Stendhal’s time in Milan and Bologna.

Not hesitant to name names, or let his French prejudices against the English show, Stendhal amuses with tales of mixing in Italian society from September 1816 to October 1817.

Visits to opera houses and theatres and art galleries abound, as well as the first telling of the experience of Stendhal Syndrome.

The ten page foreward by the translator Richard Coe is a brilliant biography of Stendhal. 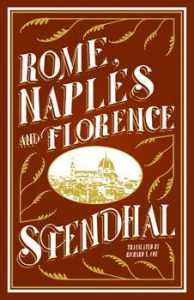 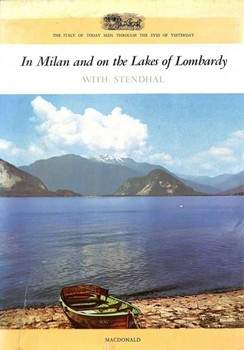 In Milan and on the Lakes of Lombardy with Stendhal, travelogue (sort of)

Although Stendhal is listed as author, that’s not really accurate since he did not plan this book.

Rather, in 1961, Diego Valeri curated extracts of Stendhal’s writing about Milan and the lakes of Lombardy (Lake Maggiore, Lake Como, Lake Garda) with large color photos. It’s a kind of guidebook brought to you by Stendhal.

I love the idea of this book, and recommend for anyone visiting these places.

Thank you for indulging my affection of Stendhal in this post. I hope you’re tempted to pick up one of these books. The beauty of the autobiographical writings and travelogues is that you can pick them up and enjoy ten pages, a bit like a short story.

Let me give just one last example… When I picked up Memoirs of Egotism again to write this post, I was charmed by this observation that opens Chapter VI,

What a genial idea! I’ve long recognized novels will touch me according to the resonance the characters and their stories have with my life at that moment of reading. Why not make a record of that à la Stendhal? I’m going to do it.

Original manuscripts by Stendhal are maintained and accessible online through a joint project of the city of Grenoble, the Université Stendhal – Grenoble and MSH-Alpes. The manuscripts shown in the featured photo are part of the Grenoble effort.

These books by Stendhal recommended above are available from their publishers as follows: The Charterhouse of Parma (translated by Richard Howard, Modern Library Classics) from Penguin Random House; Rome, Naples and Florence from Alma Classics; The Life of Henry Brulard from New York Review Books. Memoirs of Egotism and In Milan and on the Lakes of Lombardy with Stendhal are both out of print, but used copies are readily available online.

The Forte di Bard towers over the entrance to the Valle d’Aoste, and is open to tourists. After holding off Napoleon for fourteen days in 1800, the Austrians and the Savoy army holding the garrison surrendered to Napoleon, who then razed it to the ground. It was later rebuilt by the Savoys in its present massive, and more secure fashion. In addition to historical exhibits, art shows are often held in this dramatic location. Worth a visit.

The Postcard of Ivrea shows the Castello di San Giuseppe in the surrounding countryside. This property, which at various times in its history was a fort, a convent, or retreat for 19th century intellectuals, is now a four star hotel. It is also my favorite place for a stop when driving from Milan to Courmayeur – sometimes just for dinner, sometimes for an overnight stay.  I recommend.

Despite the emotional impact his stay in Ivrea had on Stendhal, beyond describing the enormous happiness experienced there in his autobiographical writings, Stendhal never visited or wrote about Ivrea again in any of his works.

Since this post has touched on the Austrian occupation of northern Italy, here’s one last recommendation:  Senso, a novella by Camillo Boito (1882), adapted for film by Luchino Visconti (1954), with a great opening scene at La Fenice opera house in Venice. Senso tells the story of a Italian countess who falls in love with an Austrian soldier, with consequences. Classics, both book and film. 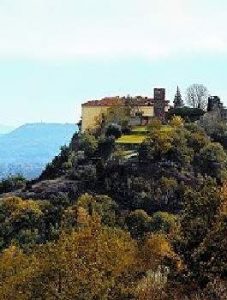