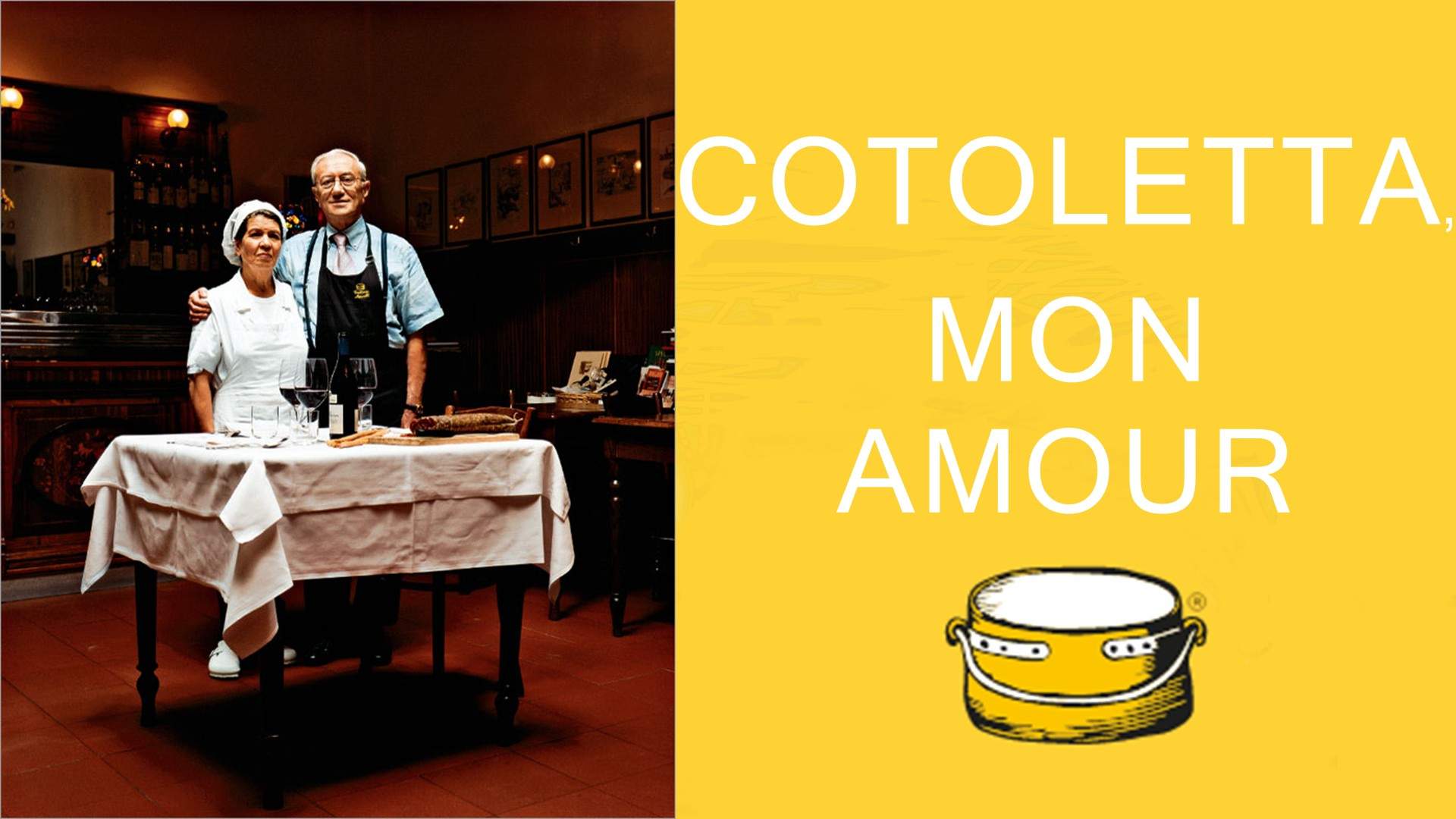 I was going to title this post The Last Supper in Milan, but I was afraid you’d think I was writing about Leonardo Da Vinci. I’m not.

My love for cotoletta could be explained in various ways. As I said in one of the first posts (so long ago!), I married into a family with cotoletta on the family crest. And in keeping with family tradition, my husband Lorenzo makes a great cotoletta, at least once a year… (How soon is Valentine’s Day?)

It’s also a dish intimately connected with Milan, the city I love, my second hometown. But more than anything, it’s just wonderful to be served a cotoletta covering the entire plate, with the smell of its butter fried crust, its mix of crunchy exterior with tender interior, and the delicious challenge – and joy – of eating every last bit up to the bone.

We’ll get to the recipe soon, but first, let me explain the rejected title.

The Last Supper in Milan

Lorenzo and I have a tradition which has been in place for decades. Before any trip to Milan ends, on the last evening before flying away, we dine at Trattoria Masuelli. Lorenzo’s sister Francesca and brother Livio join us. And I always order cotoletta alla milanese (on their menu, le milanesine).

Trattoria Masuelli has been our favorite restaurant in Milan ever since our friend Gurv, sommelier and lover of Italian wine and food, introduced us in the 1990’s to the restaurant, and to the Masuelli family who have welcomed guests since 1921.

It has everything you want from a favorite restaurant, starting with a warm welcome from not only the owner, but everyone working in the room. An traditional atmosphere awaits with crisp white clothed tables, and a bread basket with the best grissini in the world (remember, I’m an expert). And of course, there’s the unfailingly excellent food and wine, with a menu focused on the cuisine of Lombardy and the Masuelli family’s native Piedmont.

You can imagine our excitement when, in Seattle, on May 7, 2006, Lorenzo and I opened the Sunday New York Times Magazine and saw the wonderful picture of Signor and Signora Masuelli in the featured picture above, with their profile under the heading “The Originals: They Do It Their Way.”

As I recall, we were immediately on the phone to congratulate them on the terrific portrait, and a fax machine was even turned on to send a copy immediately.

Since then, their son Max (or Massimiliano as his apron reads) has taken over the restaurant and allowed his parents to retire to their beloved Piedmont. And the family tradition for warmth and excellence has carried on.

I will therefore let Max, from pictures posted by the restaurant, take us through the preparation of cotoletta alla milanese. 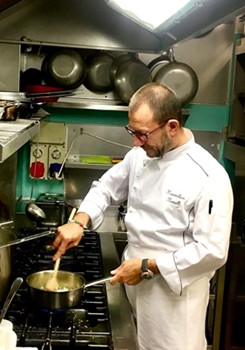 In March of 2008, the City of Milan granted the recipe for Costoletta alla Milanese the title of “denominazione comunale,” thereby declaring it to be authentically derived from an historic dish of Milan. In the declaration, the City traced the history of cotolleta to a dinner held on September 17, 1134 by the monks of the church of Sant’Ambrogio who were honoring the Saint Day, or onomastico of San Satiro (the older brother of Sant’Ambrogio, the patron saint of the church, and of Milan).

A recipe first appeared in a cookbook in 1855 when Giuseppe Sorbiatti – a cook with experience in prestigious hotels and for aristocratic families – included it in his Gastronomia Moderna. Here is Sorbiatti’s recipe, all two sentences of it:

Let’s walk through it, step by step with Max, shall we?

If there is fat on the edge of the chop, slit the fat border to the meat so the chop will not curl during cooking.

Pound the meat to flatten and reduce the thickness of the chop. (The surface area of the chop will expand.) 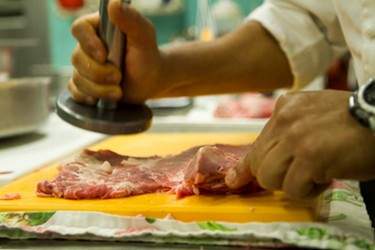 Prepare bread crumbs (using quality bread and grissini), and spread out the crumbs in a pan.

One chop at a time, dip the chop in the beaten eggs to coat, and then roll the chop in the bread crumbs, ensuring the  surface is well covered, and patting the coating to be sure it sticks. (For a thicker, crunchier crust, you can perform the coating two times, as they do at Trattoria Masuelli.) 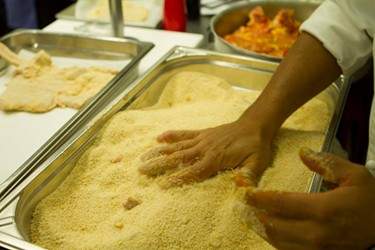 After coating each chop, let the chops rest at least 15 minutes.

Melt one stick, or 4 ounces, of butter in a skillet.

Note: For best results, clarify the butter first so that it has a higher smoking point.

Just as the butter reaches its smoking point, saute each breaded chop until the breading is golden and crunchy on each side (six to eight minutes total).

Pat each chop quickly with a paper towel to absorb any excess butter.

Salt and pepper the chop as desired.

Serve immediately, together with a lemon slice.

Popular accompaniments are potatoes roasted with rosemary, or chopped cherry tomatoes and arugula. 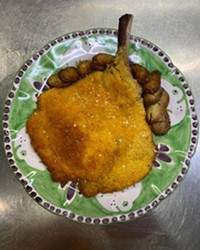 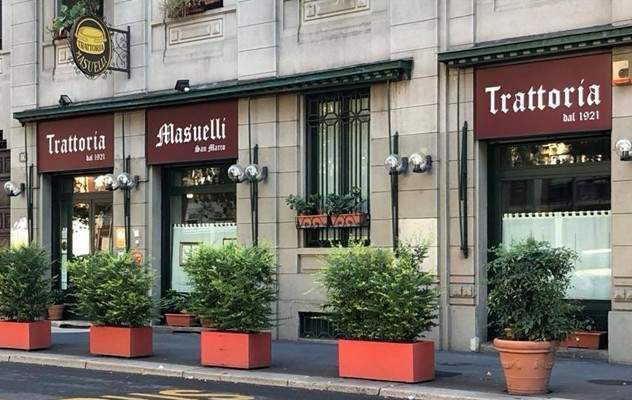 As much as I love tradition, I think Lorenzo and I will need to change it on the next trip to Milan.

After 633 days away, and counting, we need to dine at Trattoria Masuelli for the FIRST night’s dinner of the next trip.

Stendhal never wrote about food in his diaries and travelogues. He was not a foodie.

But in his memoir The Life of Henry Brulard, he writes of entering Milan for the first time in June 1800. And his memory of cotoletta is one of the very first things he describes, “They brought me some excellent bread-crumbed cutlets. For many years after, this dish reminded me of Milan.”

The City of Milan granted Costoletta alla Milanese status as an authentic and historic dish from Milan, with the recipe available as a downloadable pdf. (In case you’re wondering, costoletta is the Italian word for chop or cutlet, and cotoletta is the same in Milanese dialect.) The recipe for cotoletta in English, together with instructions for clarifying butter, can be found here.

The Postcard is the Basilica di Sant’Ambrogio, where the first recorded dinner in 1134 of cotoletta with the monks took place. Because I want to give you, my readers, the most accurate information, I dug into the sources. The primary source usually given for this event is the History of Milan | Storia di Milano by Pietro Verri, first published in 1783. Verri cites Count Giulini as his source, and suggests the information is inconclusive. After some hunting, I found the Memoirs | Memorie of Count Giorgio Giulini, first published in 1760, where he discusses the dinner. It’s complicated. First, it took place in 1148, not 1134. Second, the dinner was the source of much contention, since the monks were demanding from the abbot not only a nine dish, three course feast to celebrate San Satiro, but also wanted candles and an offering of money. An archbishop was sent in to mediate the contentious dispute. The result: the monks got the dinner with cotoletta, but no candles, no money. When I asked Lorenzo to read Giulini’s account to be sure I was understanding it correctly, his response was, “This could be a Saturday Night Live sketch.”

Per gli Italiani | For Italian speakers:

In the process of searching for the authentic recipe for cotoletta, I discovered:

A lovely collection of traditional recipes from Lombardia | Lombardy, Per un codice della cucina lombarda, assembled by the regional agricultural department, and available as a downloadable pdf.

Gastronomia Moderna by Giuseppe Sorbiatti (third edition, 1888) in the digital library of the Biblioteca Nationale Centrale di Roma, and available to view here. The cotoletta recipe is #768 in this version. 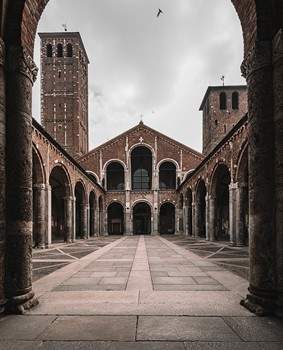