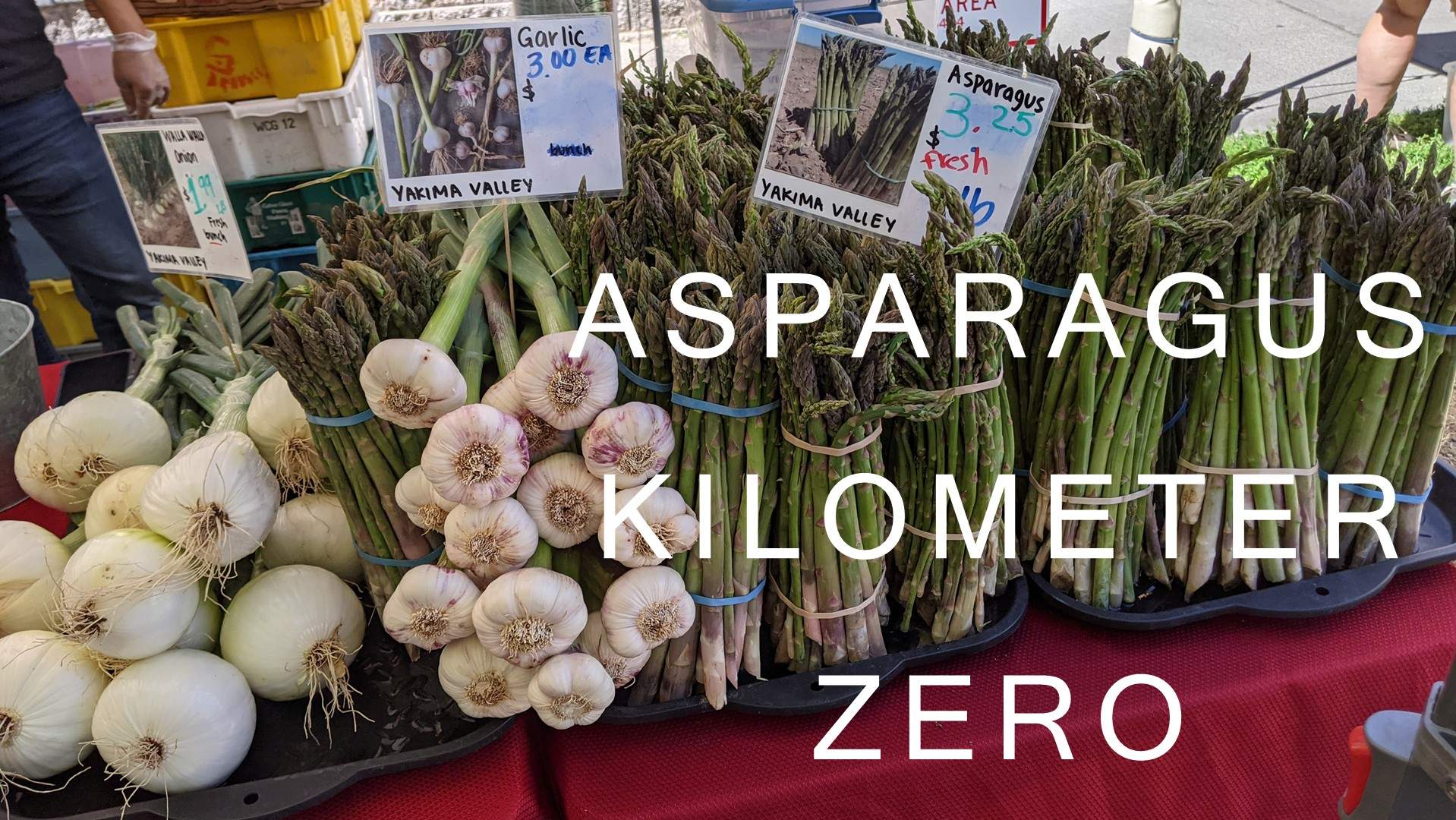 One of the things I love in Italy is going to the weekly neighborhood outdoor markets.

When we’re in Milan, you can find me every Thursday morning at the market on Via Osoppo. 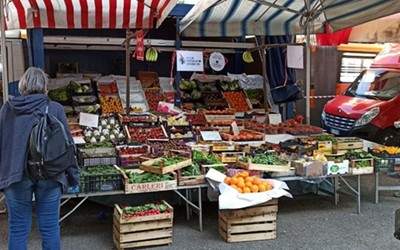 When in Courmayeur visiting my brother-in-law Livio, you’ll find us every Wednesday morning at the market in Dolonne.

(Look at those beautiful mountains…. Oh how I miss them…) 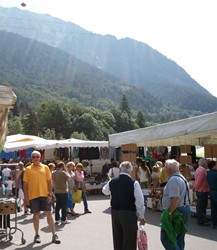 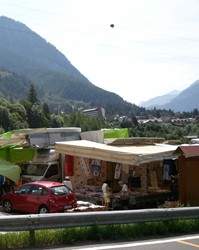 The reasons are compelling:

The quality of the fresh fruits and vegetables is consistently high.

The produce is ripe – No need to buy rock hard pears and wait weeks for them to ripen.

The produce is in season – Artichokes appear in the spring and at a certain point they disappear. Same for asparagus, and every other type of produce. It’s always a joy when favorite foods reappear for the first time in a season.

And here’s another factor to consider – The food is often (but not always) produced locally, known in Italy as “zero kilometer food.”

I was thinking about zero kilometer food this week for two reasons. 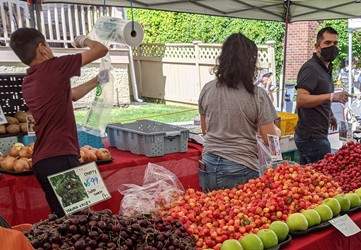 Look at these beautiful (and delicious) cherries from Yakima Valley, the breadbasket of Washington, 180 miles away from Seattle.

Second, Livio emailed the summer program from Courmayeur, with this information on the Courmayeur Food Market.

Ten agricultural growers have been selected to bring produce directly from their farms less than 10 kilometers away from Courmayeur, without middlemen distributors. 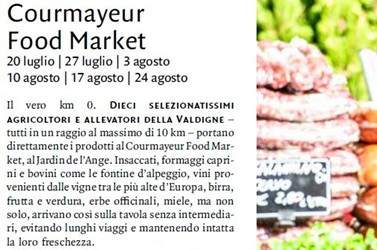 Zero kilometer food focuses attention on the ecological impact of food production and transport. It asks consumers to make food choices that will reduce pollution, enhance local crops and support their producers, promote biodiversity and cut down on food waste.

The best explanation I found – and argument for – zero kilometer food came from the magazine of Milan Expo 2015, the world’s fair of 2015 focused on food and sustainability. As the article said,

The planet needs concrete action against pollution and malnutrition.

Choosing a food that is as close to zero kilometer as possible is sustainable, gives farmers back management of the food chain and nourishes us with healthier products.

The benefits are for everyone, including the planet.

In other words, our food choices have consequences.

I loved being reminded of Milan Expo 2015, which we visited several times during the summer of 2015. (Did any of you attend as well?)

OK, I admit I’m a sucker for world’s fairs.

It started with our first big family vacation when I was a girl to the New York World’s Fair.

And then, living on Queen Anne hill, we’re kilometer zero from the iconic Space Needle built in the Seattle World’s Fair.

So I was primed to visit Milan Expo 2015, with its central Tree of Life.

This monument was designed to represent the Expo’s theme… 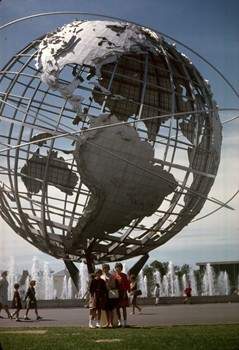 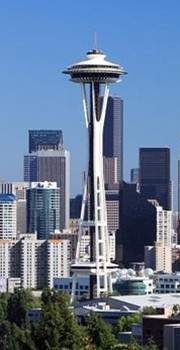 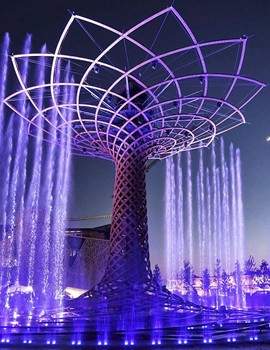 FEEDING THE PLANET, ENERGY FOR LIFE

Milan Expo 2015 urged us to consider – and take action on – the difficult contradictions of food production and distribution in the modern world.

Large numbers of the world’s population are hungry and undernourished. The 2020 Global Hunger Index estimated that 690 million people were suffering from chronic hunger, with 135 million people experiencing crisis levels. Yet, 1.3 billion tons of food are wasted every year. And millions more die from diets with too much food, often because those diets have poor nutritional value.

And here’s another paradox: Agricultural production is both a significant contributor to climate change, and a major victim of those changes. Did you know that cattle are responsible for well over half of all agricultural emissions (including from food transport)? Eating less beef is one of the most powerful steps an individual can take toward protecting the planet. (On that criteria, Lorenzo’s rhythm of making cotoletta once a year on Valentine’s Day may be just about right…)

The goals set out in Milan Expo 2015 are ambitious:  To guarantee healthy, safe and sufficient food for everyone, while respecting the planet and its equilibrium.

I obviously can’t do justice to the large number of pavilions and exhibitors at Milan Expo 2015 who tackled these issues. But I do want to highlight just a couple of fascinating exhibits which have stayed with me over the five years since the fair.

These two pavilions highlighted the potential of vertical farming. 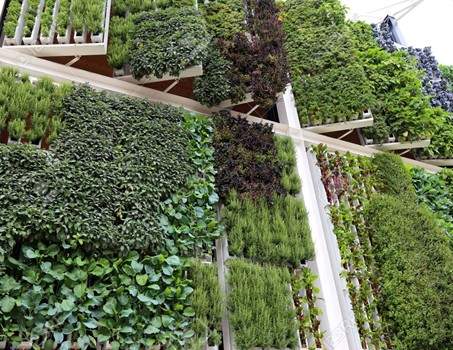 The US Pavilion had a football-field sized wall with 42 varieties of herbs, vegetables and grains grown in 4′ motorized hydroponics beds made from recycled plastic. The panels, with soil added to help retain water and nutrients, waved slowly to ensure adequate sun.

The Israeli Pavilion’s wall contained wheat, corn and rice, inspired by actual crops. An irrigation system monitored the water needed by the single plants, rather than simply wetting the soil. 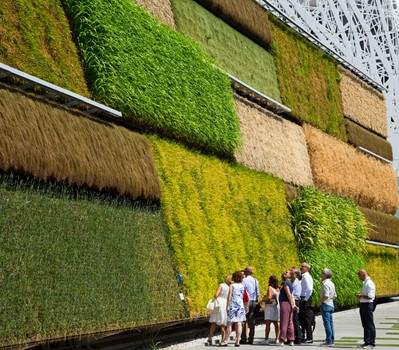 The promise of vertical farming is to increase agricultural production closer to consumers while reducing land requirements, to cut the amount of water needed in irrigation, and to improve air quality with the plants scrubbing the air of carbon dioxide. Pretty intriguing, giusto?

And here’s the really cool thing – Milan already has two high rise residential towers in the central city known as the “Bosco Verticale” or “Vertical Forest.” Opened in 2014 – the year before the Milan Expo – these buildings feature 700 trees and over 20,000 different shrubs and plants.

The plant life, which is the equivalent of 7.5 acres of forests, not only moderates the building temperature in summer and winter, but also converts 30 tons of CO2 each year. And it filters out dust particles, protects the residents from noise pollution and creates a habitat for birds.

It’s a short step from these vertical forests to vertical farms in the city, don’t you think? 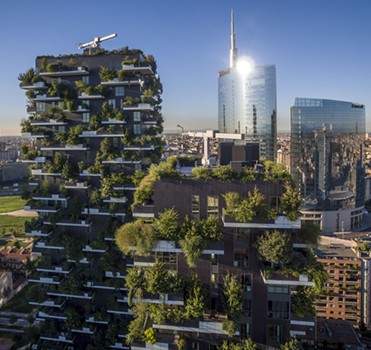 There’s still one more Milan Expo exhibit I want to tell you about, but I think we’ve covered enough territory for today.

Plus, don’t you want to know what I did with all that asparagus I bought? Stay tuned…

Did you get your STARVING FOR ITALY Newsletter #1 this week?  It contains the latest on getting back to Italy, some reading recommendations, and even a recipe…

Alla prossima volta, until next time, A. S. Furbetta

Did you know that Washington State (Yakima Valley) is the largest producer of asparagus in the United States? And here, BTW, is a Yakima Valley produce schedule, very interesting… (Such fun facts to learn while blogging!)

The article from Milan Expo 2015 magazine on zero kilometer food is here (in Italian, my translation above). Here’s a good English description of the concept in Italy.

The Milan Expo 2015 is detailed in the official report issued following the event. And here is a picture filled review of the leading exhibitions. The final report on the US Pavilion is available as a downloadable pdf here.

Vertical Farming is explained here. The designer of the Israeli Pavilion gives an interesting interview here.

World’s Fairs continue. The next Expo of 2023 will be in one of my favorite cities, Buenos Aires. The theme is “Creative Industries in the Digital Convergence.” Sound interesting to other writers? Meet you there? 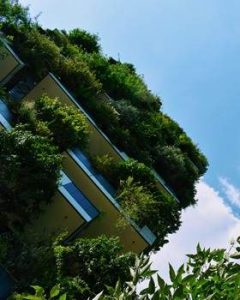